Life of Ideas, Notions, and Concepts with Guest Éric Méchoulan*

University of Montreal Professor to Give Talk on Friendship

On March 6, from 4 to 5:30PM the McGillicuddy Humanities Center, as part of the Life of Ideas series, curated by Frédéric Rondeau, will host scholar Éric Méchoulan. Méchoulan will give a talk titled “On Friendship: A Brief History of the Concept from Aristotle to Facebook.”

Éric Méchoulan is an early modernist and cultural historian with significant interests in critical theory and digital humanities. His early interest in the history of the book (first as a librarian and then as a cultural historian), as well as in collective memories have led him to work intermedially: from the very institutions that authorize communication to the materialities of communication (images as well as texts), Méchoulan argues that attending to the transmission of texts and images allows for a sharper understanding of aesthetic works.

His most recent book, Lire avec soin (Careful Reading) focuses on the idea that reading is not a simple decoding of signs. Rather, it must be integrated into a history of media and a theory of justice. Méchoulan uses the concept of an “ethics of care” to make visible relations which previously went unnoticed, or the importance of which have been undervalued. Méchoulan focuses on the relationships in which individuals find themselves, considering that subjects are the temporary products of intertwined flows stabilized by media, cultural habits, institutions, in short, by life. His work is attentive to the “politics of transmission” in the sense that before thinking about what we say, we should think about how we say it:

“Learning to read carefully is not simply a matter of learning to see the latent content of discourses and situations, it consists, rather, of building a relationship of trust with events, things, and living beings in order to better understand and comprehend their multiple temporalities. Intelligence in this case is not vexed by questions of domination or mastery: as language suggests, it is, in fact, a question of being intelligent in the company of others—both past and present—that is to say, of creating a microsociety of readers. One is never intelligent alone. ” (Lire avec soin 146).

Éric Méchoulan is a professor of French Literature at the Université de Montréal, and also director of the Research Centre Virtuoso on digital uses, cultures, and documents. He is also the head of the committee of the Fondation Paul-Zumthor. From 2004 to 2010, he served as a directeur de programme at the Collège international de philosophie in Paris.

Méchoulan’s March 6 talk “On Friendship. A Brief History of the Concept from Aristotle to Facebook” will take place at the Allen and Sally Fernald APPE space, Stewart Commons IMRC.Refreshments will be served.

The talk is part of the yearlong talk series “Life of Ideas, Notions, and Concepts” curated by MHC faculty board member Frédéric Rondeau which included fall and spring panels of UMaine faculty, as well as upcoming guest speaker Enzo Traverso. 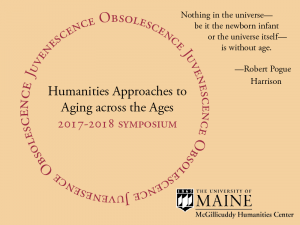 Part of the McGillicuddy Humanities Center’s 2017-2018 symposium is Juvenescence/Obsolescence: Humanities Approaches to Aging across the Ages.