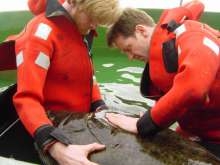 Description:
Nick Brown has 22 years experience in the aquaculture business, both in the commercial sector and in R&D. He gained his Masters and PhD in Aquaculture at the University of Stirling, Institute of Aquaculture in Scotland, UK. He has commercial production experience in rainbow trout, European turbot, Atlantic halibut, Atlantic cod, green sea urchins, and polychaete worms. He has worked in the commercial sector and in R&D in both marine and freshwater aquaculture in the UK, Canada and the US.

Dr Brown has been Director of the University of Maine’s Center for Cooperative Aquaculture Research Center since 2001. The CCAR is both a business incubation facility and a center for applied aquaculture research, development and demonstration. Current projects include aquaculture of Atlantic halibut, Atlantic cod, green sea urchin, sand worms, and seaweeds.

Nick Brown designed the new marine hatchery facility at the CCAR, a 24,000 ft2facility capable of producing a number of marine species including Atlantic halibut and Atlantic cod. He has also designed a number of large scale recirculation systems for the production of several species.

Research interests:
Much of my research has focused on the development of the protocols and physical systems (tanks, lighting, incubation systems, recirculation systems)for the production of marine finfish, in particular the Atlantic halibut (Hippoglossus hippoglossus). Through my MSc and PhD work in Stirling, conducted mainly at the Seafish Industry Authority at Ardtoe, Scotland, and then working with Marine Harvest and R&R Finfish Developments Ltd in Canada, the basic environmental requirements, husbandry and nutrition were developed to achieve good survival and high quality of juvenile halibut from the hatchery. These techniques were adapted and improved during the last 8 years at the CCAR and adapted successfully to recirculation systems. Much of my time at the CCAR has been devoted to design and construction of marine recirculation systems for the production of a variety of species including green sea urchins (Strongylocentrus droebachiensis) and the polychaete worm (Nereis virens). For the latter species, I designed the first indoor recirculating production system which produced 7 metric tons/year. I have also taken a marine finfish hatchery design from paper through to full scale (24,000 SF) and this will be finished in 2009.

Recently I have become interested in combining species that we have at the CCAR into integrated systems. For example, we have just successfully completed trials investigating the use of solid wastes from a recirculating system for halibut to grow high value polychaete worms.