School of Food and Agriculture 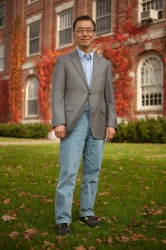 Iron (Fe)-bearing minerals, with their preponderance of surface hydroxyl groups play a critical role in biogeochemical processes such as the adsorption of organic matter (OM).  The formation of Fe-associated organic matter is now known to be a critical factor in the stabilization of carbon (C) in soils. The changing global climate is causing intensification of rainfall, with global average maximum daily rainfall increases of 5.9 – 7.7% per °C of warming. This increase affects the stabilization of soil C because greater precipitation favors soil Fe reduction.  Anaerobic conditions can drive the reductive dissolution of soil Fe(III) (oxyhydr)oxide minerals through predominately biotic processes that results in the release of aqueous Fe(II) cations and previously-adsorbed OM to soil solution.  Upon re-introduction of O2 into the anoxic soil as it dries, Fe(II) will be oxidized leading to re-precipitation of Fe(III) (oxyhydr)oxide, which can re-stabilize the OM.  Rainfall intensification combined with higher global temperatures, will result in increased wet-dry soil cycling and repeated release and stabilization of soil OM in the future.

OM interactions with mineral surfaces are dynamic and sensitive to interfacial energies and topology.  I have used ultrahigh resolution electrospray ionization – ion cyclotron resonance – mass spectrometry to show that soil OM molecules exhibit temporal molecular fractionation at Fe (oxyhydr)oxide interfaces.  This temporal fractionation leads to a ‘zonal’ assembly of OM at the mineral interface and results in a spatially diverse scaffolding architecture for different classes of OM molecules.  The chemical details of the interaction of soluble OM with mineral surfaces remain unclear.  While the formation of covalent bonds via ligand exchange has been frequently assumed for OM-mineral bonding, my density functional theory calculations using electron density data have shown that the bonds involved in the complexation between model OM ligands and Fe nano-clusters are more electrostatic than covalent.

This work will bring this powerful artificial intelligence approaches to climate change mitigation research.  ‘Natural climate solutions’, including increasing levels of soil organic matter to sequester soil C, are being emphasized at the federal and state levels, including in the 2020 Climate Action Plan, Maine Won’t Wait, released by Governor Mills.  Although policies are being proposed to increase soil C sequestration in terrestrial ecosystems, including agricultural and forested lands, many questions remain about the effectiveness of this practice in slowing the rate of atmospheric CO2 increase.  In particular, long-term stability of sequestered C under changing environmental conditions is unclear.  This work addresses this question.