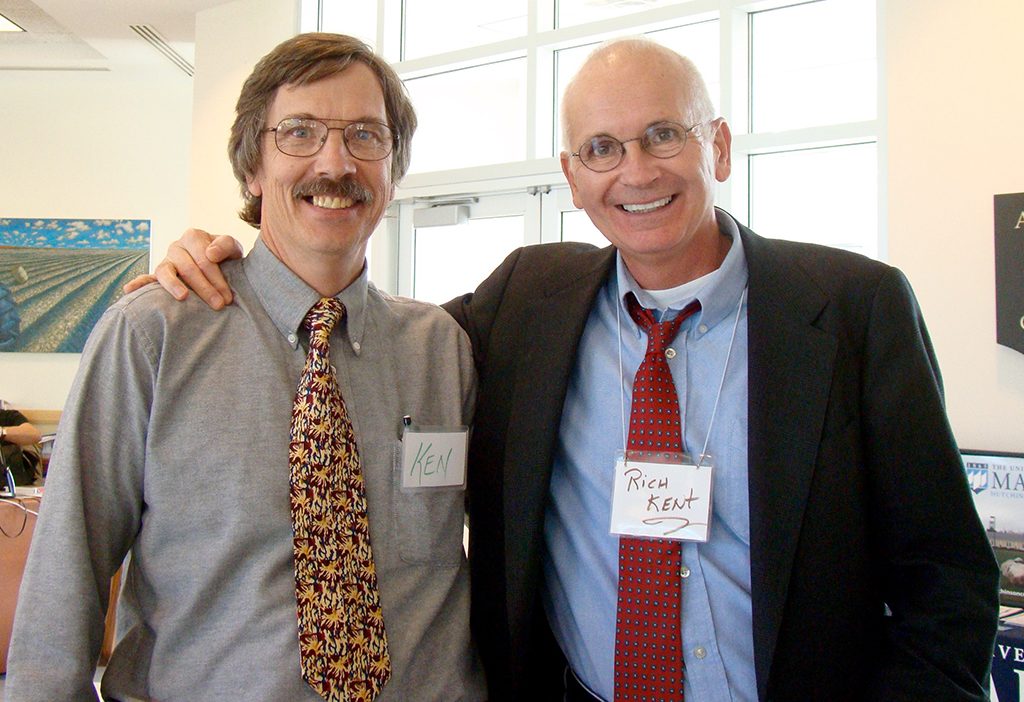 There’s an old saying that golf is as much mental as it is physical. But your average golfer doesn’t deliberately practice the mental aspect of the game.

“The goal of the series is to help athletes become students of the game,” says Kent, a professor of literacy education who studies how athletes — particularly student-athletes — can use writing to help improve focus and performance.

Over more than a dozen years, Kent has authored or co-authored nine books designed to help athletes become writers and critical thinkers about their sports. These include the foundational book in the series, Writing on the Bus: Using Athletic Team Notebooks and Journals to Advance Learning and Performance in Sports, as well as books designed for specific team and individual sports, such as soccer, volleyball, swimming and skiing. He also maintains the website, WritingAthletes.com.

Surprisingly, Kent says he’s only golfed about five times his entire life, despite having several family members who play.

“I love watching championship golf and reading golf books, especially from the caddy’s perspective,” says Kent. “But I’ve never been lured by the links.”

By contrast, Martin, an assistant professor of literacy education, has played golf most of his life. He grew up playing at Cohasset Country Club in Massachusetts, where he also caddied.

“When we started working on The Golfer’s Workbook, it was fun for me to look through some of Rich’s previous work, and see how it could be adapted for golf,” Martin says.

In a series of conversations, including several walks around the mall on the University of Maine campus, Kent and Martin came up with a book suitable to a variety of skill levels, from professionals and high-level amateurs to your occasional weekend golfer to high school coaches who want to use the book with their golf teams.

The book follows the arc of a golfer’s season. The first section includes prompts for pre-, mid-, and post-season planning, as well as more general reflections aimed at getting people to think about why they play the game. Another section provides writing exercises designed for golfers to consider their routines, which Martin and Kent say are just as important to writing as they are to golf.

The heart of the book is the “Golfer’s Journal and Playing Record.” It includes 40 separate playing records, where golfers can write down things like what course they played, weather conditions, and what they had to eat and drink before, during and after each round. It also includes a scorecard and places to make performance observations and other reflections. Each playing record is paired with a journal prompt designed to get golfers to examine the different physical, mental, emotional and social aspects of the game.

“Golf actually has a long history with writing,” Martin says, pointing to the scorecards that all golfers keep and the yardage books maintained by professional golfers to keep track of the distance of various strokes.

“When you look at professional golfers, there’s always a team around them to help with that stuff,” he says. “Recreational golfers can also benefit from analysis and reflection, including writing, and that’s one of the things the workbook can help with.”

The last three sections include places to reflect on health and fitness, additional writing exercises (including space for golfers to describe their fantasy golf foursome and their dream golf trip), and finally a section for notes or other thoughts that don’t fit anywhere else.

“There’s no right or wrong way to use the book,” Martin says. “We emphasize up front that it’s really about what works best for the individual golfer.”

Kent first started noticing the benefits of writing to athletes as a high school teacher and coach in Maine. Later, the benefits were confirmed through his research. At Writing Athletes, he says they have a mantra: Write. Learn. Perform.

Although the book is adaptable to an individual golfer’s skill set or goals, Kent says there’s one feature that’s important to get the maximum benefit: With plenty of white space for writing, the book can and should be written in.

“What we’ve found with previous books is, when you finish the season, you have a record of the season,” Kent says. “It’s a great way to think back and look forward to the next season.”