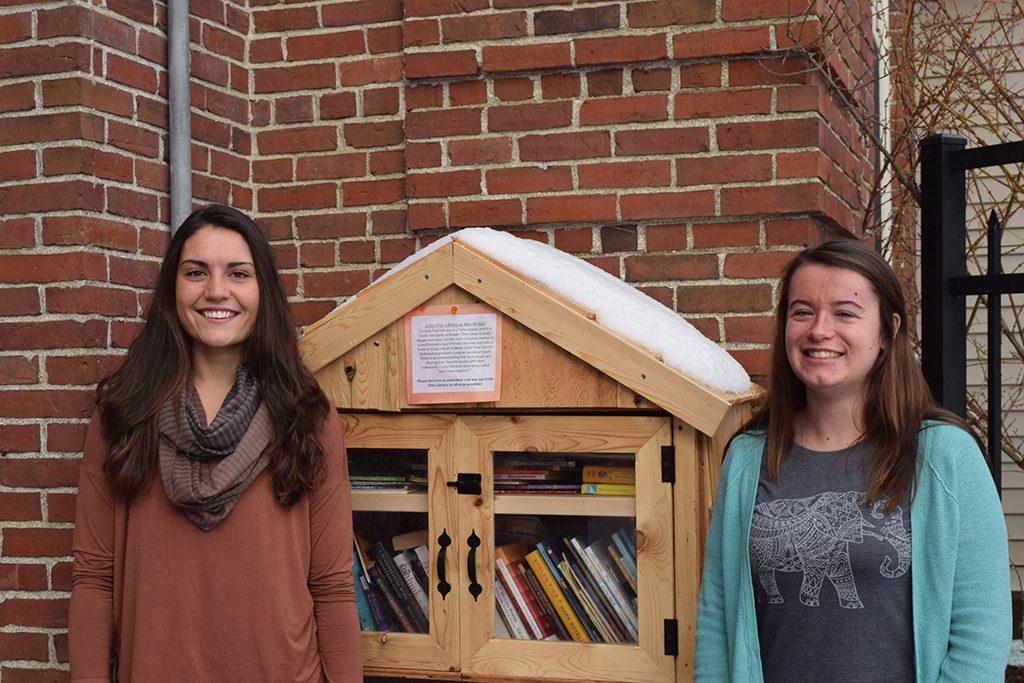 The Katherine Miles Durst Child Development Learning Center inside Merrill Hall on the University of Maine campus gets a lot of donated books.

“We have so many,” says Aleeza Stearns, one of two head teachers at the center. “There’s a whole room upstairs just full of books.”

Organizing and culling all of those books can be time consuming, especially at a facility that serves 35 preschool-age children, so Stearns and her co-head teacher, Olivia White, came up with a plan. They created a Little Free Library where visitors can take excess books off the center’s hands. The small, house-shaped wooden box is attached to Merrill Hall’s brick exterior, just outside the door closest to the child development center. It’s filled with books for readers of all ages, from picture books for small children to classic literature for adults.

“Anyone can use it,” says White. “A lot of parents have asked, ‘Is it really OK to take a book without putting another one in there?’ And we’re like, yes, we have a bunch more where those came from.”

The Wilson Center gave Stearns and White a $750 grant for the pint-sized library. The funds covered materials as well as the fee to register with the Little Free Library nonprofit, which supports similar projects and maintains a map of little libraries worldwide. The organization lists more than 50 tiny libraries in Maine, including six in Bangor. The one at Merrill Hall is the first in Orono.

White and Stearns say when they embarked on the project they had no idea how much work it would entail. Now that it’s over, they say they learned a lot. Members of the UMaine Student Chapter of the Associated Builders and Contractors donated their time to build the little library. The pair also worked with the Office of Facilities Management to make sure it would be installed properly and comply with the Americans with Disabilities Act.

After all was said and done, they had a little under $200 left from the Wilson Center grant, which they plan on putting in the coffers of EChO, the Early Childhood Opportunities scholars program at UMaine. The money will be set aside for future repairs to the tiny library.

In May, Stearns and White will earn their master’s degrees in early literacy and special education respectively. After that, the Katherine Miles Durst Child Development Learning Center will get two new head teachers. They say the library is their way of saying thanks to the center, which they’ve been involved with since they were undergrads.

“This place has given me so much,” says Stearns. “I wasn’t even sure I was going to college, and now here I am six years later, getting a master’s for free.”

They say their only hope for the Little Free Library is that people use it. With all the books donated to the learning center, one thing’s for sure: It will never be empty.