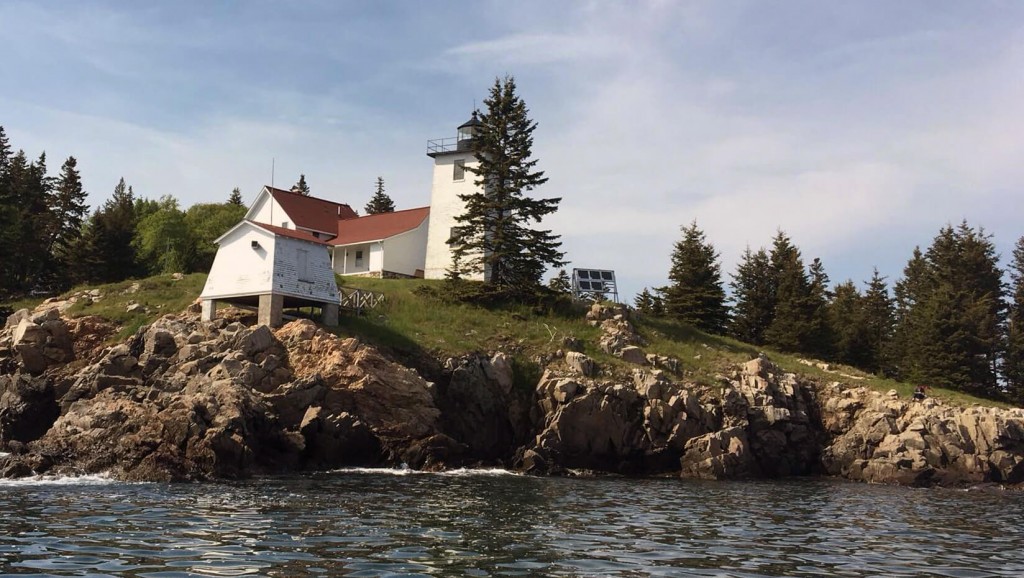 Thirteen students and two professors from the University of Maine spent the final week of May on Swan’s Island doing community service projects and taking in the island’s natural and cultural attractions as part of a unique May Term travel-study course.

When Annette Nelligan and Laura Cowan met last fall at a seminar on service learning, they found they shared a love of Swan’s Island. Nelligan, a lecturer in counselor education with the College of Education and Human Development, and Cowan, chair of the English department with the College of Liberal Arts and Sciences, decided to team up to teach a class, “Maine Island Culture and Community Engagement.”

“We’ve gone there on field trips for the multicultural education and multicultural counseling classes,” Nelligan says of Swan’s Island. “It’s a good way to show students that Maine has many different cultures, and not just the obvious cultures of race and ethnicity, but that there can be a culture to a community.”

Located six miles south of Mount Desert Island, Swan’s Island is home to about 350 year-round residents. In the summertime, the population swells to more than a thousand as seasonal residents and tourists inhabit the island. A ferry shuttles people and vehicles between the community and Bass Harbor up to seven times a day — a trip that takes about 40 minutes each way, depending on the weather. The main industry on the island is lobster fishing, but Nelligan says many residents also have creative jobs, including a local printing press that makes gift cards, posters and ephemera using old photographs and anything else they can get their hands on.

“The people of an island community really have to rely on each other, and they have to be resourceful,” she says.

The idea for the class was twofold: First, to expose students to Maine island culture; and second, to have those students do community service on the island. Nelligan says they were inspired by UMaine’s five-year Blue Sky Plan, in which the university’s service mission is front and center as the first of five pathways to a new UMaine. Students in the Swan’s Island course spent their days renovating the island’s historic lighthouse keeper’s house, or doing volunteer work at the printing press, school, library and historical society. In addition, each student chose two books to read about Maine island life, and in the evenings they would have group discussions about their readings at one of the two rental houses where they stayed.

“We had a good variety of books,” Nelligan says. “We had a scientific book, ‘The Secret Life of Lobsters.’ We had history books, like ‘A History of Swan’s Island.’ We had some students read novels by Ruth Moore, who lived on nearby Gotts Island. And some of the elementary education students read children’s books that were about Maine islands.”

Cowan, who has spent part of her summers on Swan’s Island for nearly 30 years, calls it a special place, where community and environment are intertwined.

In addition to the readings, students kept journals, documenting their impressions of Swan’s Island. Cowan says she tries to teach her students to think about “a sense of place” in their reading and writing, and having class on the island helped the class understand that concept and apply it to their own lives.

“Maine is a state with rich cultural diversity and incredible natural resources in terms of the coast, Baxter State Park, and the mountains and the forests and things like that,” Cowan says. “And for students who’ve been here all their lives, that’s part of their identity, even if it’s not an obvious part of their identity. So anything that makes students more aware of, and able to think about the place that they’re from is wonderful.”

Alex Chasse, a senior majoring in history and secondary education, found parallels between life on Swan’s Island and in his hometown of Fort Kent.

“There are a lot of similarities. Everyone seems to know one another. It’s a relatively slower paced lifestyle,” Chasse says.

But he also noted some differences.

“It was a bit difficult to get into the pace of island life,” he says. “The first couple days we had a schedule, and then either because of communication issues, transportation issues, or the weather, we’d just have to play it by ear and go with what life dealt us.”

For example, on their fourth day on the island, several students decided to take advantage of the sunny weather to kayak three miles to nearby Marshall Island. Fortunately, they were ahead in their work on the community service projects, so they didn’t feel guilty for taking the day off.

For the class readings, Chasse chose two books that would help him better understand both Swan’s Island and Fort Kent: “A History of Swan’s Island” by H.W. Small, a doctor who lived on the island in the late 19th and early 20th centuries; and “The Aroostook War of 1839” by Gary Campbell, a book about the dispute between the United States and United Kingdom that helped establish Maine’s northern border.

Chasse’s community service project involved scanning and digitally archiving photographs for the Swan’s Island Historical Society. A 2008 fire destroyed much of the town’s historical archives, so he found the work both important and enlightening.

“Just seeing the past lives that have come through this community was pretty interesting,” he says. “Eventually all of the photos will be put up on a website, and people will be able to search them.”

Now that they’ve returned from their trip, Nelligan and Cowan will be reviewing the students’ journals, and Nelligan plans to write a research paper on how the experience changed the students’ ideas about Maine island life.

Chasse has some advice for anyone who plans to visit Swan’s Island: “This place has a lot to provide that I think a lot of people are looking for — history, sea kayaking, canoeing, hiking trails. But you have to take it as it comes to you, otherwise you’re going to be bored out of your mind.”