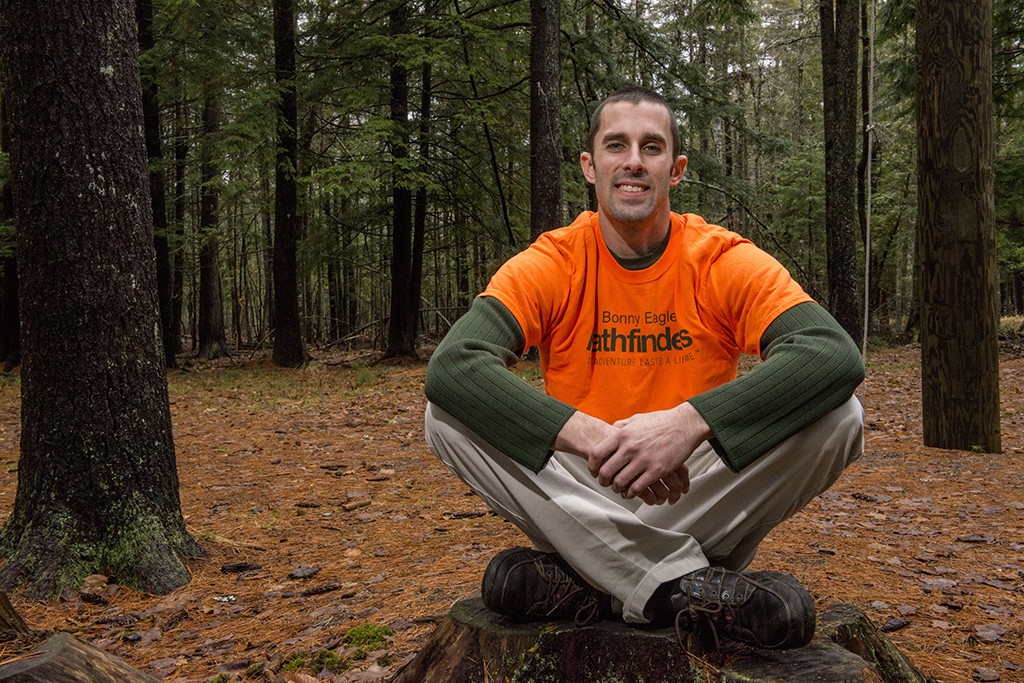 A chance meeting in the dairy aisle at the grocery store in summer 2013 led Jesse Kaye-Schiess to enroll in the master’s program in kinesiology and physical education at the University of Maine.

He had finished his undergraduate degree in KPE at UMaine in 2012 and taught for a year in Lincoln, Maine. But like many first-year teachers, he struggled with the workload and budget constraints.

That’s when Mary Mahoney-O’Neil, the associate dean in the UMaine College of Education and Human Development, crossed paths with him, and talked about graduate school and applying for a graduate assistantship.

Kaye-Schiess, who grew up in Shapleigh, Maine and graduated from Massabesic High School, works as a graduate assistant in the College of Education’s advising center, where he helps undergraduate students decide when to take classes so they can earn their teacher certification and graduate on time.

He also volunteers with Pathfinders, an outdoor program at Bonny Eagle Middle School in Buxton, Maine. The program is designed for students who don’t play sports or do any other extracurricular activities, but who have an interest in the outdoors. Activities include hiking, canoeing and mountain climbing. For the past three years, Kaye-Schiess has helped lead a fall trip for 7th and 8th grade boys that includes visits to the University of Maine, Acadia National Park and more.

“We’re by ourselves, middle of the woods, no cell phone reception, no walkie-talkies, and it’s kind of just us and the wilderness,” he says.

Kaye-Schiess estimates he’s logged more than 800 hours with Pathfinders, which he’s been able to apply toward his graduate apprenticeship. He says it’s rewarding to watch the youths grow in confidence and self-awareness, from the beginning of a trip to the end.

“Creating strong group dynamics, and team building and leadership are a big part of what we try and do. And it’s tough to do that in a school system when there’s so many other distractions, and they go home every day and then come back,” Kaye-Schiess says. “(In Pathfinders), they’re with us for five days. Can’t talk to their parents, can’t talk to anybody else besides us, and that creates a lot of trust.”

He says the University of Maine helped prepare him for leading Pathfinders trips. Namely, the classes he took while earning a minor in outdoor education as an undergrad. He dreams about one day expanding the program statewide and leading students on trips monthly.

In the meantime, he has two classes left to finish his master’s degree, focused on outdoor sports science. And he says he’s discovered a new passion: advising students.

“That’s what my graduate assistantship is all about,” he says. “Ideally, I would like to do that in the future. And that’s not something I even knew was a possibility before I started my master’s program.”

No matter what he decides to do in the future, Kaye-Schiess says he knows one thing:

“I’ve been provided with so many different opportunities that I never even knew were available,” he says. “And the University of Maine did that for me.”

Tell me about the Pathfinders program.
Bonny Eagle Middle School is in southern Maine. A large, Class A school, really good at football, five different towns, and a lot of kids who work on farms and a lot of kids from underprivileged families. And we work with a lot of the students who have been identified through their teachers and other faculty as kids who would benefit from getting out of the classroom and outside for a week. It’s advantageous to their academic, social and emotional health. All the students really aren’t engaged in the school system. They don’t play sports or participate in extracurricular activities. So this is a way to promote engagement.

When did you start bringing students on longer trips to University of Maine and Acadia National Park?
We started fall 2013. That year, seven students did fishing, canoeing, kayaking, outdoor cooking, shelter building, archery, hiking Chick Hill. At UMaine, they did rock climbing, the ropes course, a tour around campus. The second year, we used Maine Youth Fish and Game, and included Acadia National Park. Some kids had never seen the ocean before, so watching the sun rise and set on a place as gorgeous as Acadia National Park was absolutely outstanding.

Having them journal was one of the ways that we captured all of their experiences, in their words. They were awesome to read by the end of the week.

Last year, we went from seven to nine students; this year, 11.

Do you see a change in the students from the start of a trip to the end of it?
My good friend Luke Buchanan is the 8th grade science teacher at Bonny Eagle Middle School and the trip leader down there. We do prep trips on Tuesday and Thursday afternoons — little hikes around that area. And once they come up here, it’s more of a group dynamic and bonding situation — just us and the wilderness. Creating strong group dynamics, team building and leadership is a big part of what we do. Developing that in 7th and 8th grade boys who really don’t trust too many people in the world is absolutely awesome to see.

Where did you do your undergrad?
I got my undergrad here as well, in the kinesiology and physical education department with the folks in teaching and coaching. I have my K–12 certification in PE and then my health minor and my outdoor education minor as well. I graduated in May of 2012 after doing my student teaching in Melbourne, Australia. I did my student teaching abroad with AustraLearn.

Why UMaine?
Because I grew up here. I have a huge connection to UMaine. My brother graduated from here. A lot of my high school friends came here for their undergrad. And knowing all the people that I met during orientation through the kinesiology and physical education department, Dr. Butterfield, Dr. Reif, Dr. Leonard. Walter Abbott was a huge influence when I came up here. He’s been a huge mentor for me during my whole undergraduate and graduate program. So it was relationships. The relationships and networking that I had prior to coming here and then what I’ve developed since I’ve been here has been outstanding. I couldn’t ask any more of the University of Maine.

How would you describe the academic atmosphere at UMaine?
Wonderful. I’ve been provided with so many different opportunities that I never even knew were available, and the University of Maine did that for me. And if I wasn’t here, I don’t know if those same opportunities would have been as successful as I’ve had the last seven years.

You mentioned a few mentors, but can you think of one that you worked closely with, a professor who’s been a role model or who’s made your UMaine experience better?
Yes. Dr. Reif in the KPE department. He was my adviser during my undergrad for teaching and coaching. He helped me with two or three different courses, working with elementary students, working with secondary students. Focusing my efforts toward at-risk youth. And he has been an absolute rock star in my life.

Have you had an experience at UMaine either academically or socially that’s changed or shaped the way you see the world?
I took a May term class called Wilderness First Responder. It was a three-week certification course that was part of my outdoor education minor. Charlie Bloeden, my outdoor education adviser, taught it. And it was an amazing experience, knowing that there are situations that I’m going to be in in the woods, whether with students or friends or family, and being aware of the safety measures needed and the amount of responsibility that it takes to bring people into the outdoors. A lot of people take that for granted, especially in Maine where we have rivers, lakes, streams, mountains, seasons, ocean. We have plenty of opportunities to get outside, but being able to guide trips and bring people out there safely is another thing.

Describe UMaine in one word.
Motivating. From the moment I stepped on this campus I’ve always felt connected and put in a position to reach my potential. I feel like I’ve come very close to doing that in a lot of different aspects of my life. I’m constantly motivated by being here, and around these wonderful people and staff.

Most memorable UMaine moment?
This is so cliché, but graduation 2012. Seeing Mary Mahoney-O’Neil up on the stage, Dr. Butterfield, Dr. Reif, my family, my grandparents, my brother and sister, and knowing that I finished something that a lot of people don’t have was amazing. And I’d just come back from Australia. So, being off that little high and then going right into an amazing celebration was just outstanding and something I’ll always remember.

What do you hope to do after you graduate from your master’s program? And how has UMaine helped you reach those goals?
When I started my master’s program, I really didn’t think I was going to gain the skills that I have over the past two years. One thing that I think I’ve really developed is academic student advising. I work with all of our Teacher Ed Program majors. Being able to guide them through their courses of study, from their first year through student teaching, has been outstanding. Ideally, I would like to do that in the future. And that’s not something I even knew was a possibility before I started my master’s program.

Most interesting, engaging or helpful class you’ve taken at UMaine?
Educational psychology. The professor, Sid Mitchell was on sabbatical that year, and Mary Mahoney-O’Neil, our current associate dean, stepped in and taught that class for that semester. She captivated me from the first class. Sat in 101 Little Hall with 350 other kids, and she found a way to get everybody engaged and motivated to be successful in that class. I didn’t want to miss a class, she was that outstanding.

What difference has UMaine made in your life?
UMaine has made a profound difference in my life. I cannot even put the words together to describe the amount of experiences and knowledge and relationships and communication that they’ve given me. I would not be where I am today or where I will be in the future without the University of Maine.