The best way to avoid arsenic poisoning is not to drink water that contains arsenic. For community water supplies, it may be possible and more economical to switch to a water source that is lower in arsenic rather than trying to remove arsenic from water.

Usually surface water sources are lower in arsenic than groundwater, but they have to be treated to remove disease-causing microorganisms.

Not all groundwater is high in arsenic. Even in places where the arsenic levels are high, the concentration seems to be patchy. The reasons for this are not known, but choosing a new location for a well can help.

When all else fails, treat the water

Unfortunately, if you have your own well, you have no choice but to use the water under your property. Some communities may only have access to water that is high in arsenic as well. In these cases, the water must be treated to remove the arsenic. The requirements for treatment are different for private wells and public water supplies.

Public water supplies have to remove the arsenic from all of the water, since there is a single pipe that takes the water from the treatment facility to homes. The water district has no control over the end uses of water, so they can’t treat only that portion of the water that will be used for drinking and food preparation. That means that all of the water used for showering, washing dishes, clothes and cars, watering the lawn and any other use must be treated, even though they pose little risk to consumers. Every treatment step costs money. In areas like cities, where people live close to one another, there are many people that can all contribute to the cost of building and running the treatment facility, and the economy is good, it is usually feasible to treat the water. That’s the case for cities in the United States. In some developing countries, the cost of central treatment of city water is still too high. In most rural areas worldwide (including the US), central treatment of the water supply is too expensive.

For public water supplies, the main methods of treatment are precipitation, adsorption or ion exchange.

Chemical precipitation (as opposed to rain or snow!) occurs when the concentration of a salt in solution is higher than its solubility limit. Crystals begin to form and the chemical “crashes” out of solution.

Well, other chemicals can precipitate, too. Some chemicals are not very soluble at all, and they will precipitate even when the concentration in water is very low. In water treatment, you can add chemicals to the water that are not soluble when the ion you want to remove is present. For example, to remove calcium (Ca2+), which contributes to hardness, you can add soda ash, Na2CO3. Calcium carbonate (CaCO3) is not soluble in water, so the calcium ions and carbonate ions precipitate to form solid calcium carbonate, which can be filtered out of the water. When these kinds of reactions occur, you can also get the removal of other ions which get stuck in the solid lattice that is created as the salts precipitate, or they may get trapped as the precipitate settles out.

If the aim is to remove a compound that is difficult to precipitate, like arsenic, you have to rely on trapping to remove them by precipitation. Iron is often added to help remove other contaminates from water. Other metals bind to the iron as it forms a precipitate with hydroxide ions. The whole schmear can then be removed from the water by settling and/or filtration.

Adsorption is when a chemical sticks to a surface. The surface has to have free binding sites for the chemical to attach to, and obviously the binding sites have to be attractive to the chemical you’re trying to remove. A commonly used adsorbent (the surface that the chemical sticks to) is activated carbon. That’s what is in many filtration systems that you can put in the refrigerator. Unfortunately, activated carbon is not much good for arsenic. Arsenic will adsorb to the surfaces of sorbents like alumina (an aluminum based adsorbent) and iron or iron oxides.

Ion exchange is where you have a solid material or resin with a lot of charged binding sites. These sites are occupied by ions with the opposite charge (counter-ions). As you pass water over these surfaces, ions in solution can kick off the counter-ions and bind to the ion exchange sites, if they are more attracted to the site than the original counter-ion. That’s where the exchange part of the name comes in – the ion you want to remove is exchanged for the counter-ion which ends up in the water. To remove arsenic from solution by ion exchange, the arsenic must be in a charged form (As(V) at near neutral pH will have a negative charge), and it must displace the counter-ions on the ion exchange resin (the solid). 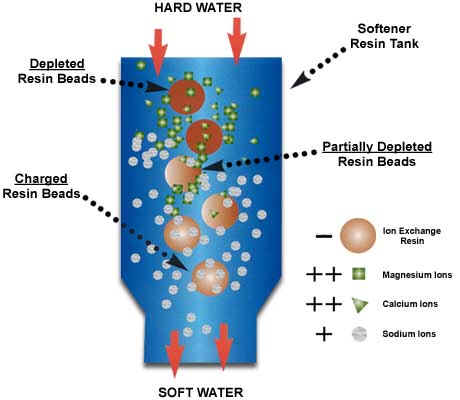 In the picture, the ion exchanger is trading sodium counter ions (gray dots) for calcium and magnesium (green triangles and squares). This is a water softening scenario. The water at the top of the column has a lot of green squares and triangles (magnesium and calcium). These displace the gray sodium dots on the resin beads releasing the sodium so that the water coming out has only sodium.For arsenic treatment you would need an anion exchanger, where the counter-ion is negatively charged. Chloride or hydroxyl ions are typical counter-ions.

Point of use treatment

For home use, treatment options need to be simple, relatively fail-safe and require little maintenance, since most of us don’t have the time or expertise to constantly tinker with the water system. It is also possible to limit water treatment to the water that is to be used for drinking water and food preparation because exposure through skin contact with water is very low. This is much less expensive than treating all of the water entering the home.

Systems that are available for homes include adsorption/ion exchange units and reverse osmosis units. Chemical precipitation is too tricky for home use, and you would have to deal with the buildup of solids (called sludge).

Reverse osmosis is when you apply pressure to the water on one side of a membrane that does not allow charged molecules to pass through. The membrane prevents the passage of ions, so the water that passes through to the collection side of the membrane is stripped of ions, like As(V). The trouble is, small, uncharged molecules like As(III) will pass through the membrane, so the effectiveness of the system depends on the form of the arsenic present in the water.

Individual homeowners can also treat all of the water that they use rather than only the drinking water, but the cost of such units is usually high (thousands), plus maintenance costs.