Silvia Nittel and Max Egenhofer were awarded  a $500,000 grant from the National Science Foundation to investigate a computational framework for synthesizing and analyzing fields based on very large numbers of high throughput, real-time sensor data streams, and for creating continuous representations on-the-fly. This project aims to advance the analytical potential of live-streamed data, historical data streams, and model simulations by creating an overarching representation in the form of the field data model with a set of operators that establish the field algebra. Extending sensor data streams to fields allows scientists to work with high-level abstractions which can facilitate  their analytical tasks such as finding insights about changes, trends, or unexpected events happening in the real world. The project will integrate fields and data streams mathematically so that mappings between both are well-defined.

A prototype system was tested at Cherryfield Farms. A soil moisture sensor network was deployed in the blueberry barrens to collect real-time data to support the automated irrigation system.

Reinhard Moratz collaborated with the Biodiversity Research Institute (BRI), HiDef Aerial Surveying, and Sun Edison on a Department of Energy project to better understand how birds and bats avoid wind turbines. The project employed a stereo-optic, high-definition camera system from HiDef Aerial Surveying. The Robot interaction lab developed software to analyze video images from the cameras to detect bird and bat response to offshore wind projects, where it is not possible to conduct traditional wildlife monitoring.

The project deployed systems in order to track flying animals in three dimensions. The two ultra high-definition cameras were offset to create a three dimensional view of a wind turbine, the horizon, and an area surrounding the turbine. Eagles and bats were chosen as the focal species for analyzing camera performance for two reasons: researchers would like to better understand how these species respond to and avoid turbines and both species often receive attention during the permitting process for new wind power projects. 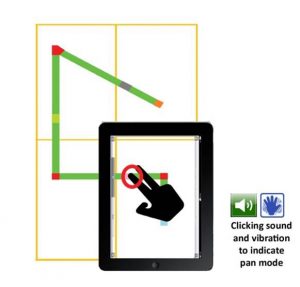 The goal of this project was to develop and evaluate a highly intuitive tool for members of the blind and low-vision community that would address the longstanding challenge of affording low-cost and effective access to graphical materials. This project investigated a multimodal combination of vibro-tactile, audio, and kinesthetic cues that can be generated by modern touchscreen tablets (especially smartphones), to convey useful visual information in real-time. Benefits of this approach include portability, affordability, and flexibility of use for multiple critical and common applications such as those enumerated above.

The research contributed to better understanding of how blind and low-vision individuals process non-visual information, which is essential for rendering perceptually salient multimodal graphics. It also helped establish best practices for rendering these graphics using a vibro-audio interface implemented on touchscreen enabled devices, as well as for similar future specialized interface development efforts.

Perception of Scene Layout by Machines and Visually Impaired Users

Project Summary: The project investigated computational methods for object detection, spatial scene construction, and natural language spatial descriptions derived from real-time visual images to describe prototypical indoor spaces (e.g., rooms, offices, etc). The primary application of this research is to provide blind or visually impaired users with spatial information about their surroundings that may otherwise be difficult to obtain from non-visual sensing. Such knowledge will assist in development of accurate cognitive models of the environment and will support better informed execution of spatial behaviors in everyday tasks.

A second motivation for the work is to contribute to the improvement of spatial capacities for computers and robots. Computers and robots are similarly “blind” to images unless they have been provided some means to “see” and understand them. Currently, no robotic system is able to reliably perform high level processing of spatial information on the basis of image sequences, e.g., to find an empty chair in a room, which not only means finding an empty chair in an image, but also localizing the chair in the room, and performing an action of reaching the chair. The guiding tenant of this research is that a better understanding of spatial knowledge acquisition from visual images and concepts of spatial awareness by humans can also be applied to reducing the ambiguity and uncertainty of information processing by autonomous systems.

A central contribution of this work is to make the spatial information content of visual images available to the visually impaired, a rapidly growing demographic of our aging society. In an example scenario a blind person and her guide dog are walking to her doctor’s office, an office which she has not previously visited. At the office she needs information for performing some essential tasks such as finding the check-in counter, available seating, or the bathroom. No existing accessible navigation systems are able to describe the spatial parameters of an environment and help detect and localize objects in that space. Our work provided the underlying research and elements to realize such a system.

Information Integration and Human Interaction for Indoor and Outdoor Spaces

Project Summary: The goal of this research project was to provide a framework model that integrates existing models of indoor and outdoor space, and to use this model to develop an interactive platform for navigation in mixed indoor and outdoor spaces. The user should feel the transition between inside and outside to be seamless, in terms of the navigational support provided. The approach consisted of integration of indoors and outdoors on several levels: conceptual models (ontologies), formal system designs, data models, and human interaction.

At the conceptual level, the project drew on existing ontologies as well as examining the “affordances” that the space provides. For example, an outside pedestrian walkway affords the same function as an inside corridor. Formal models of place and connection were also used to precisely specify the design of the navigational support system. Behavioral experiments with human participants assess the validity of our framework for supporting human spatial learning and navigation in integrated indoor and outdoor environments. These experiments also enable the identification and extraction of the salient features of indoor and outdoor spaces for incorporation into the framework. Findings from the human studies will help validate the efficacy of our formal framework for supporting human spatial learning and navigation in such integrated environments.

Project Summary: The core activity was the study of the interplay between topological spatial relations with holed regions and topological spatial relations with separated regions to address the potentially complex configurations that feature both holes and separations. Three characteristics of such a set of topological relations are addressed: the formalization of a sound set of relations at a granularity that allows for the distinction of the salient features of holed and separated regions, while offering the opportunity to generalize to coarser relations in a meaningful and consistent way; the relaxation of such relations so that the determination of the most similar relations follows immediately from the applied methodology; and the qualitative inference of new information from the composition of such relations to identify inconsistencies and to drawn information that is not immediately available from individual relations.

Project Summary: The goal of this project was to provide efficient ways for sensor networks to monitor such fields, and to report significant changes in them. The focus is on qualitative changes, such as splitting or emergence of holes in a region of high activity. The approach was to develop qualitative and topological methods to deal with changes. We use a combinatorial map model of the sensor network, which is rich enough so that for each sensor, its position, and the distances and bearings of neighboring sensors are easily computed. The sensors are responsive to changes in the spatial field, so that sensors are activated in the vicinity of ‘interesting’ developments in the field, while sensors are deactivated in quiescent locations. All computation and message passing is local, with no centralized control. Optimization is addressed through use of techniques in qualitative representation and reasoning, and efficient update through a dynamic and responsive underlying spatial framework.

Project Summary: This project developed a geographic database to support research on the relationships of cancer and the environment in Maine. The Maine Cancer GIS integrates geographic and demographic data with information about cancer incidence and mortality statistics and environmental variables for Maine.

Project Summary: Environmental data collections are increasing and there is a growing interest in integrating such data to investigate ecological phenomena and their interactions. Understanding space-time interactions of variables and processes is key to improving understanding of ecosystem dynamics yet these interactions are difficult to capture and assimilate across heterogeneous data streams.

Ocean observing systems (OOS) are a subset of monitoring systems that collect space-time series on ocean related variables. Different measurement protocols, variations in the space time regimes of the sensing streams, and variations in the media, formats, and quality of the sensing streams challenge the ability to integrate and synthesize this data. Exploration and analysis has tended to be constrained to individual observation data streams rather than across observation streams limiting a more encompassing view of ecological processes. This project investigated an information integration approach that involves transformation of information content from disparate observation streams to a common higher-level data type: a space-time event.

The project worked with domain scientists in oceanography to construct an ontology of events and event behaviors; developed data mining strategies to detect events in ocean related time and space-time series; and developed theory, methodology and tools to model, explore, visualize and analyze spatial-temporal events.

Project Summary: This project explored data management methods for geosensor networks. An important task of such geosensor networks is to collect, analyze and estimate information about continuous phenomena under observation such as temperature or pollutants. The main thrust of this project was the integration of spatial data analysis techniques with in-network data query execution in sensor networks.

The project investigated novel algorithms such as incremental, in-network kriging that redefines a traditional, highly computationally-intensive spatial data estimation method for a distributed, collaborative and incremental processing between tiny, energy and bandwidth constrained sensor nodes. The work included modeling of location and sensing characteristics of sensor devices with regard to observed phenomena, the support of temporal-spatial estimation queries, and a focus on in-network data aggregation algorithms for complex spatial estimation queries.