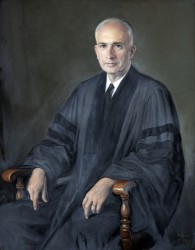 Lloyd Elliott was known for his commitment to expanding student capacity on campus and obtaining enhanced funding from the Maine Legislature for faculty and staff. Six new classroom buildings, six dormitories, two dining halls and the Hauck Auditorium were completed during his presidency; closed-circuit television was deployed to expand statewide access to classes; and an outdated apartment complex was razed and replaced by modern housing units at University Park. Elliott was instrumental in bringing President John F. Kennedy to the university in October 1963 — 33 days before his assassination in Dallas — to receive an honorary degree. A native of West Virginia, Elliott earned his undergraduate degree from Glenville State College, a master’s from the University of West Virginia and a Ph.D. in educational administration from the University of Colorado. Elliott became president of George Washington University in 1965.