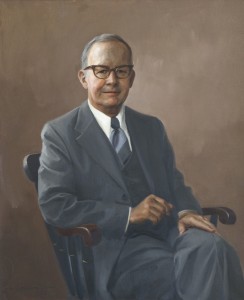 During Howard Neville’s administration, the University of Maine was designated a Sea Grant institution. He initiated and completed a major fundraiser to build Harold Alfond Sports Arena, and saw the construction of an addition to Fogler Library and an academic building named in his honor to house the departments of English and mathematics. He is credited with increasing the number of National Merit Scholars studying at UMaine and establishing academic outreach programs for students. Enrollment increased substantially during his tenure. A native of Kankakee, Ill., Neville completed an undergraduate degree in business at the University of Illinois and earned his master’s degree at Louisiana State University. He was awarded a Ph.D. in economics with a minor in history from Michigan State University. Neville died in 1981 at the age of 55.