Scientists at the University of Maine are evaluating if lobster shells can cultivate beneficial microbial communities that ward off soilborne potato pathogens. The novel shell-to-spud combination may connect two cornerstones of Maine’s food system and enhance the state’s circular economy.

Potatoes are Maine’s top agricultural commodity with a value of more than $215 million in 2021, according to a National Agricultural Statistics Service report. The crop’s value is in its roots, making it especially susceptible to soilborne diseases. Early potato dying syndrome, a fungal pathogen present in Maine, can decimate as much as half of a crop in severely affected fields.

Katie Ashley, a plant science Ph.D. student in the lab of Associate Professor Jianjun Hao, is assessing how different concentrations of cooked, dried and ground lobster shells may prevent potato disease. Ross Sousa, a fourth-year botany major from Somerset, Massachusetts, has also worked on the project as a laboratory technician. In addition to disease resistance, the team is also tracking soil microbial communities, overall crop yield, and plant emergence, vigor, biomass and height.

The ingredient of interest is chitin, which comprises 75% of lobsters’ exoskeletons and provides structural support. Chitin is also present in fungal and bacterial pathogens. Some naturally occurring soil microbes specialize in breaking down this compound. Ashley hypothesizes that adding chitin-rich shells in the fall will cultivate these beneficial microbial communities, creating a line of defense against soilborne pests.

The approach is not without precedent; chitin from other types of shellfish is already part of integrated pest management programs on farms in South Korea, Japan and California. Based on this past work, Ashley initially also considered oyster shells. She soon realized their rock-like nature makes them difficult to grind into a usable soil amendment, and pivoted to lobster. Hers is the first study to use Maine’s state crustacean and apply the practice to potatoes.

“We’re very fortunate to have both rich agricultural production and a blue economy. It puts Maine in a very unique position,” says Ashley, who earned her master’s in plant pathology from UMaine.

“We have these really valuable resources; why aren’t we using them yet? This presents an opportunity to connect the potato and lobster industries and utilize shellfish byproducts which would otherwise enter the waste stream.”

The team completed a greenhouse trial with 90 plants on UMaine’s campus this fall. A field-scale trial in the 2023 growing season will compare plots with different concentrations of chitin, compost and chemical fumigation at Aroostook Farm in Presque Isle. Ashley and Hao are hoping growers in the region may also open portions of their fields for the study.

Preliminary results indicate that the amendment also benefits aboveground plant growth by an average of 200%. Lobster shell fertilizer is not new. Ashley’s study may provide the data to support its growth into a broader market.

Hao’s lab, the Roger Clapp Greenhouses and Aroostook Farm are part of the Maine Agricultural and Forest Experiment Station at the state’s R1 public research university.

The study is an extension of a $10 million multistate research collaboration funded by the U.S. Department of Agriculture (USDA) National Institute of Food and Agriculture and led by the University of Minnesota. Hao is a co-principal investigator on the project, which aims to address key soil issues on potato farms — the mounting pressure of soilborne disease despite fumigation, and declining soil productivity that supports crop health.

“Soil microorganisms are the key to improve soil quality and can be measured as an indicator of soil health. These beneficial microorganisms are highly driven by soil amendments such as crops, plant residues, animal manures and, in this case, lobster shell meal,” says Hao, who also holds appointments in UMaine’s School of Food and Agriculture, and School of Biology and Ecology.

Further support was provided by a $14,260 Graduate Student Research Grant from the USDA’s Northeast Sustainable Agriculture Research and Education program. Sousa received a fellowship from UMaine’s Center for Undergraduate Research for his work on the project.

If successful, Ashley’s approach could provide an alternative disease control practice for Maine potato growers. Chemical inputs are the largest operating expense for the state’s growers, according to a 2008 report from the Maine Potato Board. Some, like chlorothalonil, which has been used since the early 1970s to control late blight, have been the subject of increasing scrutiny and regulation.

“Reducing the reliance on pesticides for disease management in favor of enhancing microbial soil ecology could benefit both agriculture and the environment,” Ashley says.

The concept would also provide a new market for byproducts of the lobster industry. According to the Maine Department of Marine Resources, it landed a 100-million-pound catch in 2021.

Curt Brown, a marine biologist at Saco-based seafood supplier and processor Ready Seafood, estimates that shells account for 25% of lobsters’ weight. Nearly half of Maine’s catch is processed rather than sold live, and those shells are largely destined for landfills. A new market for this byproduct would ebb that waste stream. 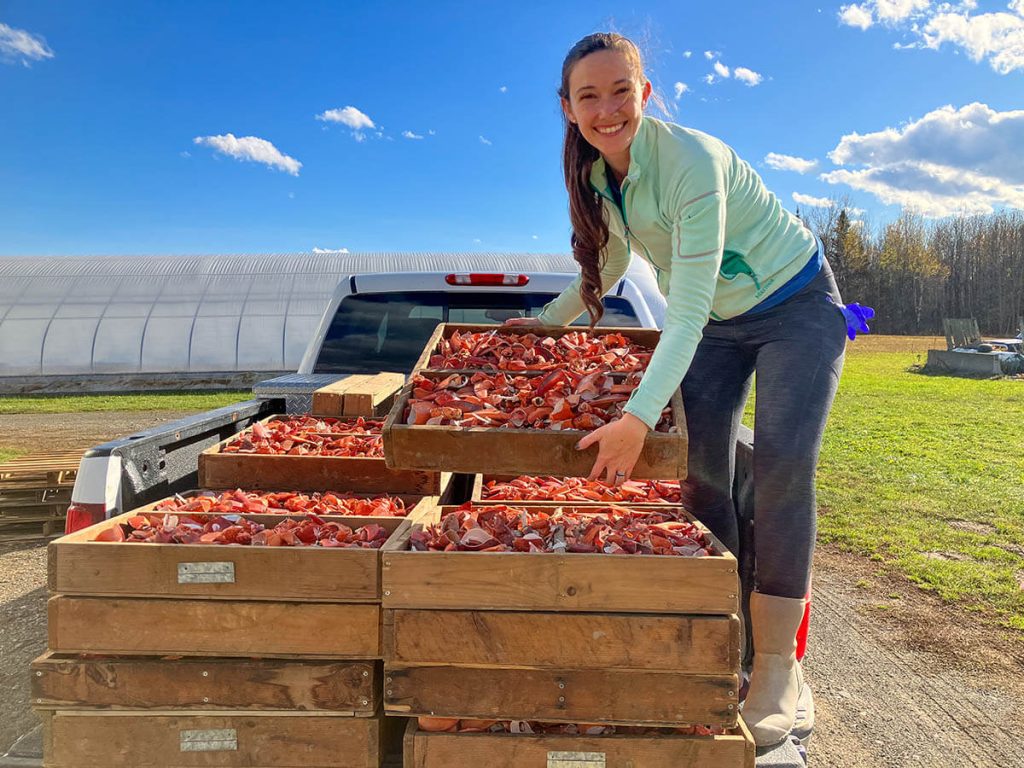 “This research has the very real potential to turn a waste stream into a revenue stream for Maine’s lobster industry, while at the same time helping to increase the value of another iconic Maine product: the potato. I can’t think of a better example of a true win-win scenario for our state,” Brown says.

Ready Seafood has a well-established record of partnering on UMaine research projects, including the American Lobster Settlement Index and exploring techniques to accelerate the shell-hardening process in recently molted lobsters.

“As Maine’s public research university, connections to the people and businesses we serve are vital. Our scientists work every day to explore opportunities and deliver solutions for our community here in Maine and society at large,” says Diane Rowland, director of the Maine Agricultural and Forest Experiment Station, and dean of the College of Natural Sciences, Forestry, and Agriculture that oversees UMaine’s agricultural and marine science research.

“We are so grateful for the continued support of partners like those in the potato and lobster industries. Together, we are charting a silo-busting course for our Maine’s working landscapes and waterfronts.”