The Mount Desert Islander interviewed Rick Wahle, director of the University of Maine’s Lobster Institute, about the 2020 Atlantic States Marine Fisheries Commission Lobster Benchmark Stock Assessment. The report, which is based on research conducted by several organizations including the Lobster Institute and UMaine’s Sea Grant program, reveals positive and negative trends in the industry, but indicates that […] 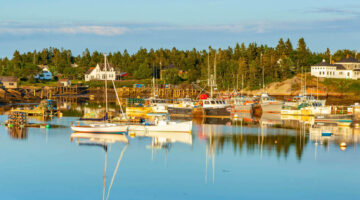 The Maine Climate Council released its four-year plan for climate action Tuesday, the same day 60-mph wind gusts were battering the state. As Council member Ivan Fernandez remarked during the public release of the report that the five hottest years in Earth’s recorded history were the last five, the temperature in a number of communities […]

Paul Mayewski, director of the University of Maine Climate Change Institute, spoke with Popular Science about research from the most comprehensive scientific expedition to Mount Everest. CCI scientists joined others in the 2019 National Geographic and Rolex Perpetual Planet Everest Expedition, which resulted in several papers published in the interdisciplinary scientific journal One Earth. “This […]

CBS News cited the Climate Change Institute Climate Reanalyzer in a story about “astonishingly warmer” temperatures in the Arctic. The average temperature for the Arctic Circle, which spans 7.7 million square miles, reached 12 degrees Fahrenheit above normal Nov. 21–22, according to the reanalyzer. Since 2012, University of Maine CCI research assistant professor Sean Birkel […]

Kimberley Miner spoke to Smithsonian Magazine about a study exploring how climate change has altered oxygen levels at Mount Everest. The study, which the assistant professor at the Climate Change Institute was not involved in, revealed that the rise in air pressure resulting from climate change near the summit has made oxygen more available. It […]

ScienceDaily and News Medical advanced a media release about a Jackson Laboratory- and University of Maine-led research team discovering a connection between the gene Dlgap2 and Alzheimer’s dementia. Catherine Kaczorowski, associate professor and Evnin family chair in Alzheimer’s research at The Jackson Laboratory (JAX), and adjunct professor with the UMaine Graduate School of Biomedical Science […]

KSAT in San Antonio reported on research from the most comprehensive scientific expedition to Mount Everest. Several researchers, including scientists from the University of Maine Climate Change Institute, participated in the 2019 National Geographic and Rolex Perpetual Planet Everest Expedition, and shared their findings in papers published in the interdisciplinary scientific journal One Earth. Paul […] 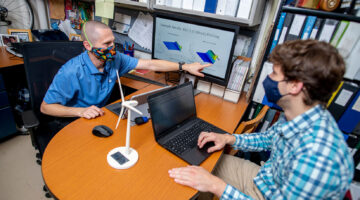 Innovation, entrepreneurship and talent development and attraction are key to growing Maine’s economy, according to the second and final report of Gov. Janet Mills’ Economic Recovery Committee. Those also are the strengths of the University of Maine System and the state’s research university, the University of Maine — Maine’s public higher education institutions that are […]

Maine Public, the Portland Press Herald, Riviera, Renewable Energy Magazine and OffshoreWIND.biz reported that Gov. Janet Mills, in partnership with the University of Maine and New England Aqua Ventus, seeks to build the first floating offshore wind research array in the U.S. Mills is searching for 16 square miles of ocean that can be leased […]