Miniature fitness trackers for lobsters and devices to monitor the quality of their shipping conditions are being prototyped as part of an initiative to reduce stress points and improve survival in the lobster supply chain for the Maine lobster industry.

The University of Maine Lobster Institute leads the initiative in collaboration with lobster industry partners and scientific collaborators at Saint Joseph’s College and Wells National Estuarine Research Reserve. This effort to improve practices to reduce mortality throughout the lobster supply chain was one of 30 projects nationwide to receive funding earlier this year from the National Oceanographic and Atmospheric Administration Saltonstall-Kennedy Program. Of the eight funded projects in the Atlantic region, it is the only one focused on the American lobster. 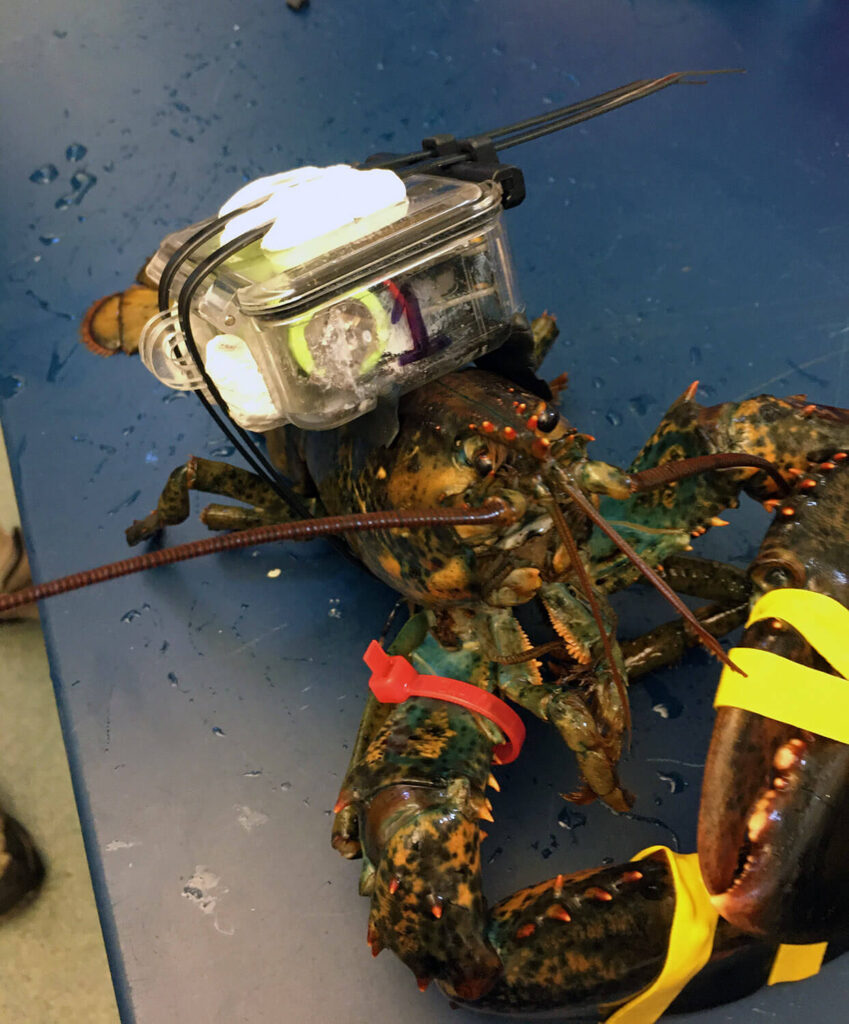 “Maine’s lobster industry asked the institute to help quantify and mitigate stress points in the lobster supply chain that reduce survival and profitability,” says Lobster Institute director Rick Wahle, who is based at UMaine’s Darling Marine Center. “The industry calls it ‘shrink’ — the mortality lobsters experience as they change hands from capture to kitchen. It’s been a long-standing, contentious issue that is heating up, both literally and figuratively, in a changing climate and competitive world market.”

As part of the two-year project funded at more than $299,000, miniature sensory devices — crustacean heart and activity trackers (C-HAT, pronounced sea-hat) — are being prototyped. Comparable to a human fitness tracker, the noninvasive device strapped on a lobster is designed to monitor heart rate and movement as the crustacean passes from trap to on-board live tank to live storage crate to truck to wholesaler or processor.

A separate sensor-equipped device called the MockLobster will also travel along with crated lobsters to log environmental conditions experienced, including temperature, light and dissolved oxygen.

“The idea is to strap the C-HAT on a lobster in a crate as a representative of how a lobster responds to the trip from boat to wharf to wholesaler and to its final destination,” says Ben Gutzler of Wells National Estuarine Research Reserve, who is collaborating on the devices along with Steve Jury of Saint Joseph’s College. “Ideally, we will also have a MockLobster traveling with the C-HAT to measure temperature, motion and other conditions, as the crate makes the trip. We’ll then do it all over again for more trips, so we have a representative sampling of trips from a particular wharf.”

Concurrently, UMaine researchers are working with harvesters and dealers to develop an economical, standardized protocol to monitor water quality and the health of lobsters as they move from trap to boat wells to live tanks on wharfs and inland storage facilities.

Andrew Goode, a UMaine Ph.D. student in oceanography and a lobsterman from Boothbay, and Cassie Leeman, a master’s student in marine biology, have been undertaking the initial setup for monitoring, data collection and analysis in collaboration with working supply chain companies, such as Ready Seafood and Luke’s Lobster, both members of the Maine Lobster Dealers’ Association. The initial work was catalyzed by a one-year, $35,000 2019 Graduate Assistantship Award to Goode from the University of Maine System Research Reinvestment Fund.

The project aims to track both conditions and lobster health through the supply chain. Goode’s and Leeman’s academic adviser, Damian Brady, UMaine assistant professor of marine sciences who also is based at the Darling Marine Center, is a co-investigator on the project; his focus is on monitoring and mitigating the conditions that lobster experience as they move from trap to dealer. At the same time, co-investigator Deborah Bouchard, UMaine Aquaculture Research Institute director, is leading the development of protocols to monitor lobster health along the way, including behavior, blood proteins, and other physiological indicators.

By developing and implementing quality-control mechanisms, and defining best practices, the researchers and industry leaders seek to address the longstanding issue of mortality in the lobster supply chain that is becoming an even greater concern with the large volume of lobster handled by the fishery, the changing climate and increasingly competitive global markets.

The goal is to improve handling practices to minimize waste and make more efficient use of the natural resource, according to the science-industry team members, including the Maine Lobster Dealers’ Association and Maine Lobstermen’s Association.

“This project is the first comprehensive industry-science collaboration to look at the way our industry does business and asks the question: How can we do things better?” says Curt Brown of Ready Seafood in Portland and Saco. “Small improvements in holding and handling practices can potentially lead to big improvements in the bottom lines of everyone along the supply chain.”

The Maine Lobster Dealers’ Association and the Maine Lobstermen’s Association have been the driving forces in the project, Wahle says. “We are making a collective effort to bring new technology to bear to address stress points as lobsters change hands multiple times in their trip from trap to table. If we can demonstrate that we have the tools to track the fate of lobsters through the supply chain and enhance their survival, that will be a success.”

The Lobster Institute, in UMaine’s College of Natural Sciences, Forestry, and Agriculture, has been working with the lobster industry since 1987. Its mission is to foster collaboration and communication in support of a sustainable and profitable lobster industry in the Northeast U.S. and Canada. More information is online.