Maine’s beech trees have been under attack for decades by a disease that typically shows up as disfiguring cankers on a tree species that is supposed to have a smooth and silvery bark. Affected trees grow slowly and can survive for years. Unfortunately, the diseased trees produce few beechnuts, a loss of an important food source for the Maine black bear. 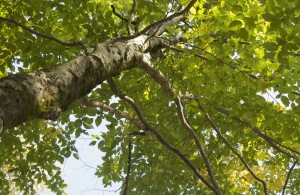 According to University of Maine researcher William Livingston of the School of Forest Resources, warmer winter temperatures from 1999 to 2002 allowed populations of the invasive, bark-feeding scale insect to explode, resulting in beech trunks turning white with millions of scale insects. Insect feeding and the severe drought at that time weakened the trees’ resistance to fungal infection and many trees died, including those along the Quebec border.

Beech bark disease has been recorded and monitored in Maine since at least 1932. It is now widespread in southern and eastern areas of the state. However, for 70 years trees along the border between western Aroostook County and the Canadian province of Quebec were free of disease and maintained healthy growth.

But in 2003, beech tree mortality in that area increased 31 percent over the year before. Mortality rates in northern Somerset, Penobscot and Piscataquis counties also increased sharply. Both diseased and healthy trees that had survived for decades began to die.

Livingston and Matthew Kasson, a former UMaine graduate student now at Pennsylvania State University’s Department of Plant Pathology, sampled hundreds of trees in the study area. They found a heightened incidence and severity of beech bark mortality and widespread presence of the fungus Neonectria. By taking core samples of the affected trees and comparing growth patterns to meteorological records, the researchers determined that the diseased and dying beeches had been weakened by dense populations of the invasive scale insect Cryptococcus fagisuga, which was favored by drought conditions and warmer winter temperatures from 1999 to 2002.

After 2002, typical sub-zero winter temperatures and normal summer rains returned, and the scale populations disappeared. However, the damage was done and beech trees died from 2003 to 2005.

“Even though [beech bark disease] has been in Maine for decades, combinations of warmer winters and droughts are associated with unprecedented levels of beech tree mortality,” according to Livingston and Kasson, who published their findings in the journal Forest Pathology.

If the warm start to the 2011-12 winter is an indicator of moderate temperatures for the coming season, forest health specialists will closely monitor beech scale populations in the year ahead. Tough times may be coming again to the beech forests of Maine.