‘“You are a good actor, but we have no Indian roles,’” is what I heard as an actor in school.  I started writing plays and I heard; “It is a good play but we can’t do it because we have no Indian actors,”’ said William S. Yellow Robe, Jr. and his life in American theater.

William is a recipient of a Robert Rauschenberg Foundation Residency for 2014. He is a Faculty Affiliate in the English/Creative Writing Department at the University of Montana in Missoula, Montana and a former Libra Professor in the English Department at the University of Maine, Orono, Maine. He is now an Adjunct Faculty member at the University of Maine, Orono, Maine. His newest publications include his short play, “Making IndiXns” in the collection; Best Short Plays in America, a short fiction story, “Miracle of 12-12-12”, appearing in the collection; “Unraveling the Spreading Cloth of Time: Indigenous thoughts Concerning the University”, Renegade Planets Publishing, a poem, “Spam Rite”, appearing in the anthology, “I was Indian: An Anthology of Native Literature, Volume II”, Foot Hills Publishing, Kanona, NY. “And the Boss says a 1, 2, 3, 4,” poem appears in “The Muckleshoot Review,” Vol. 3, Auburn, WA. His two short stories, “A Not Long ago Time Story,” and “Pilgrims for a Day,” appear in the Yellow Medicine Review: A Journal of Indigenous Literature, Art, and Thought, Marshall, MN. As a playwright he has completed a full length play adaptation of the novel, “Powwow Highway”, by David Seals for the stage, presented by the American Indian Arts Association (AMERINDA), in a staged reading at the Lark Play Development Center in New York, New York, and is schedule for a full production this fall. The play was also presented in a stage reading at the Ensemble Studio Theater, in New York, New York. He is one of the featured playwrights in the Arena Stage’s Civil War project entitled; “Our War” and will be produced in a full stage production by the Arena Stage in Washington D.C., this fall. He has completed an adaptation of the story, “Pronghorn” for stage for the Hays/Lodge Pole Schools, in Hays/Lodge Pole, Montana. He has an ongoing work entitled; “Spam Rants: How to Recover Your Files; and Other Things You Value,” a full length play of monologues, dialogues, and poetry. Some of his plays are found in two anthologies, “Where the Pavement Ends: New Native Drama,” a collection of his one-act plays, “Grandchildren of the Buffalo Soldiers and Other Untold Stores,” his full-length plays, and recently a chapter co-authored with Dr. Margo Lukens, “Two Worlds on One Stage: Working in Collaboration to Prevent Encroachment, Appropriation, and Other Maddening Forms of Imperialism,” which in appears in the collection: “American Indian Performing Arts: Critical Directions.” The full-length play, “The Independence of Eddie Rose,” appears in the anthologies, “Seventh Generation,” and “Staging Coyote’s Dream-an Anthology of First Nations’ Drama in English.” 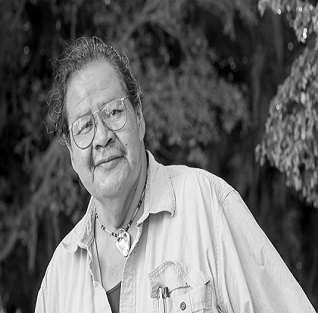