The Maine Peace Action Commitee (MPAC) was founded in 1974 with the specific focus of ending the War in Vietnam. Since then, our group has engaged in a wide variety of campaigns and actions, including a successful campaign to get the University of Maine to divest its holdings in the Apartheid South African government, the exposure of CIA recruiters on campus, and the opposition to the Wars in Iraq and Afghanistan. 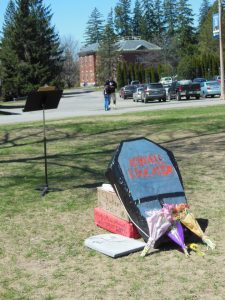 In 2012-13, we have had a special focus upon resisting student debt, which as university students is something that very clearly connects with all of us. Student debt is now the highest form of personal debt in our country, collectively topping over one trillion dollars. On average, 75% of UMaine graduates have debt from student loans, and the average debt is $29,000. We know that when we are burdened with massive debt, we are greatly inhibited from being self-determining individuals who can pursue our passions, think critically, and work for positive social change. Thus, we see student debt to be a clear injustice, but we also know that it doesn’t have to be this way. Education has been more affordable in our country in the past, and it is presently more affordable for more people in other countries with far fewer resources than the United States. Therefore, it is a question of priorities of those who make the decisions about our education. Through creative actions here on campus, we seek to challenge the priorities of these authorities who do not invest more in education, and who treat education as a business and a source of profit instead of an institution where meaningful and enriching education is the number one goal.

We also have a focus upon opposing militarism and imperialism, the traditional goals of our group. We denounce our ever-expanding military-industrial complex, the wars going on in the Middle East, and the use of militaristic violence to achieve narrow-minded, imperialistic domination of foreign governments and their economies. We recognize the interconnectedness between student debt and the cost of our country’s militaristic/imperialistic foreign policy. We see that when trillions of dollars are spent fighting unnecessary and unjust wars abroad, resources that could be spent on education (and healthcare and many other valuable services) are lost.

In opposing these injustices, we know that we must do so nonviolently. Nonviolence is the overarching strategy of our group, for we know that unless we resist nonviolently, then we will only further the same causal cycles of violence that inhibit us from knowing a truer peace. Nonviolence, of course, has many different interpretations. With the insight of Gandhi and Martin Luther King, Jr., as well as many others, we recognize that if we are to produce nonviolence change, then our nonviolence must be multidimensional, inclusive to more than just the absence of physical violence, and must be active, not passive; that is, we must actively resist but do so without using violence. 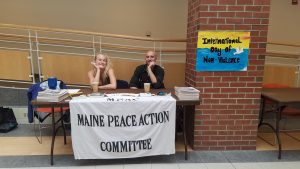 The resistance is important, but so is the constructive community building and education. It is not enough for us to simply talk about and resist what is wrong with this world; we have to together explore what a more positive world would look like, and work to implement it. To do this, we hold a weekly potluck series in Orono called “The Community,” in which we share food, share skills and share progressive ideas that counter the dominate values of violence and avarice in our society. Through this, we hope to create a community who truly need one another and that is based upon more positive values, which will be needed in order to replace the dominant and normalized institutions that perpetuate unprogressive and violent values.

In the face of violence and injustice, it is easy to fall into apathy, despair and cynicism. Doing activism, though, brings you out of this state and gives meaning and hope to your life. We hope you will join us.

When I despair, I remember that all through history the ways of truth and love have always won. There have been tyrants and murderers, and for a time they can seem invincible, but in the end they always fall. Think of it – always.