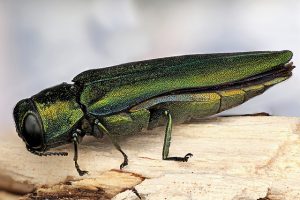 A research team at the Senator George J. Mitchell Center, in partnership with the Maine Indian Basketmakers Alliance (MIBA), has been working to facilitate the collaborative capacity of Wabanaki basketmakers, tribes, state and federal foresters, and others to prevent, detect, and respond to the emerald ash borer (EAB), a potentially devastating invasive threat to all three species of ash (brown, green, and white) found in Maine. The EAB is of particular concern to Maine Indian Basketmakers, who rely on brown ash (Fraxinus nigra) to make Indian ash splint and sweetgrass baskets, the oldest documented arts tradition in New England.

With EAB’s arrival in Maine imminent, the research team brings together partners to work in a collaborative manner to respond to the anticipated devastation. The team also seeks ways in which partners can work together to adapt to its arrival. This project will allow the team to:

Prior Research on the Emerald Ash Borer

The invasive emerald ash borer could decimate Maine’s ash trees—and jeopardize the livelihoods of Maine’s Indian basket makers, who rely on the tree for their time-honored craft. Darren Ranco, UMaine associate professor of anthropology and Chair of Native American Programs, is leading an SSI team that brings together diverse groups to try to prevent, detect and respond to this threat.

Why This Project?
Emerald ash borers have destroyed millions of ash trees in 14 states and 2 Canadian provinces. The insect is expected to arrive in Maine, where it will have economic impacts not only on basket makers, but on other communities and the forest products industry as well. The borer kills all species of ash, including those widely planted by municipalities as street trees, potentially costing communities millions of dollars to remove and replace. In addition, the insect has the potential to affect the transportation of harvested ash from forest to producer. 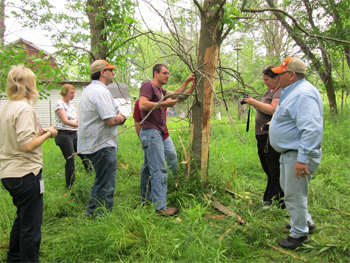 Ranco’s team, which includes members of the Maine Indian Basketmakers Alliance, is collaborating with tribes, state and federal foresters, landowners and others to develop one of the nation’s first proactive, coordinated responses on a statewide level.

The SSI team joined others in presenting expert testimony to the Maine State Legislature, which led to a ban on imported firewood to help prevent the borer from spreading. The team is continuing to develop solutions by mapping Maine’s ash tree populations, learning how to identify a borer attack, educating the public and establishing a seed bank should the beetle strike. Their findings will lead to new strategies for protecting Maine’s three species of ash trees, inform public policy and establish effective methods to bring together diverse groups to address threats from invasive species.

SSI’s emerald ash borer team and their partners are creating a safety net to help protect Maine’s ash trees from the destructive insect, which was reported in Connecticut and western Massachusetts this summer. Led by Darren Ranco, UMaine associate professor of anthropology and Chair of Native American Programs, they have made recent progress in several areas including:

Over the next year, the team will continue mapping work, interviews and data collection on stakeholder engagement, and efforts to educate and train Native youth in collecting and saving brown ash seed. Findings will contribute to a more effective and coordinated response should the borer reach Maine and provide a model for ways to bring together diverse interests to fight invasive species.