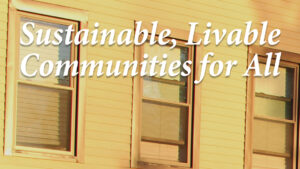 A Power Point of Ted’s talk is available.

Affordable housing for low- and middle-income employees is nearly out of reach in some Maine communities. Mount Desert Island (MDI) is one community struggling with affordable housing for its year-round workforce. Data from the US Census Bureau indicates a growing trend for MDI’s workers to commute from off the island. This figure reached more than 60% in 2014. Additionally, data indicates that Hancock County has a large share of unaffordable housing compared to the rest of the state. For example, 35% of residents spending more than 30% of their household income on mortgage costs and almost half of the county’s residents spending more than 30% of their income on rental costs. In this talk, Ted will focus on his work with the Island Housing Trust (IHT) which promotes viable, year-round communities on MDI by advancing permanent workforce housing. He will discuss the threats to maintaining a sustainable year-round community and how these threats are reflected within the community, as well as what solutions IHT, and it’s Island partners,  are proposing to strengthen MDI communities.

In 1976, Ted Koffman joined the staff at College of Atlantic (COA) working in various roles over many years. But Ted’s career changed direction in the 1990s when COA Trustees tasked him with establishing “Eco-Eco”, a statewide civic forum to engage business, environmental, academic and civic leaders in discussions focused on the environment and economy in Maine’s future.

Eco-Eco initiated the Maine Environmental Priorities Project (MEPP) which was established by Executive Order in 1993. MEPP’s Steering Committee guided a 4-year project working with technical experts to evaluate 15 environmental risks to citizens based on public health, ecology, and quality of life. MEPP resulted in a risk reduction management plan and State of the Environment report.

One unique issue, was considered given the consequences of haphazard sprawling development. Consequently, “Eco-Eco Smart Growth” was launched with a coalition of interests. It engaged with communities, development practitioners, professional town planners, and State Commissioners.

Ted’s exposure to the public policy arena led to his successful 2000 campaign for the State Legislature, where he served for eight years. In this first term, he formed and chaired the Community Preservation Advisory Committee (CPAC), an incubator for smart growth policy development. CPAC championed the 2008 Historic Tax Credit law creating attractive incentives to developers willing to invest in rehabilitating designated historic building across the State. Within the law is a bonus incentive to developers to include up to 30% of a project providing affordable housing units.

Following his Legislative service, Ted joined Maine Audubon in 2009 as executive director based in Falmouth. He retired in 2014 and returned to Bar Harbor where he serves on the Board of Directors of Island Housing Trust (IHT). IHT has created affordable housing opportunities to 35 families working and living on Mount Desert Island year-around.