We are happy to announce the selection of the spring 2019 cohort of Clement and Linda McGillicuddy Humanities Center Undergraduate Fellows.

The McGillicuddy Humanities Center Undergraduate Fellows program offers junior and senior humanities students the support needed to concentrate on their coursework and develop research projects, work collaboratively with a select group of peers, participate in interdisciplinary humanities programs, and gain professional skills. Fellows attend, help plan, and promote the Center’s various programs, putting them in meaningful contact with their peers and faculty, as well as the public. Fellows also act as student representatives of the Center’s mission on campus and in the community. 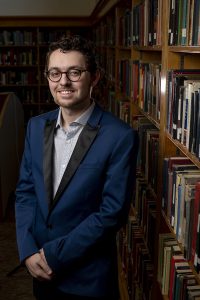 Fifth year student Connor Ferguson is an Iowa native and an English major with an emphasis in literary analysis and a minor in creative writing. After looking at a number of colleges in the area, Connor chose UMaine because of its “robust English department and receptive faculty.” His project revolves around “reviving queer authors in the canon, primarily Modernist Era authors,” he says, “because that’s where erasure of queer identity becomes prevalent. We seem to privilege people with mainstream identities, but if we’re looking to place literature in a socio-cultural perspective, we need to include queer people as well. I think it’s important to understand the place of sexuality in influencing literature.” 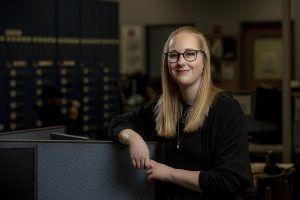 about her chosen field of study for myriad reasons, not the least of which is the field’s generous umbrella. “Media studies touches on anything projected out to a mass audience. It’s about how communication affects us, how we affect it, how it evolves with technology and with our experience of that technology,” she says. “Everything that can affect us on a massive scale is media studies. I had no idea how much we were influenced by the media—it overwhelms me sometimes, that I can apply everything I’m learning to real life—sometimes even later in the day after class.” Her Fellowship project revolves around the idea of applying George Gerbner’s cultivation theory, which essentially states that people who watch television frequently will be affected by its messages. “I want to apply a modern take to that theory to something as polarized as T.V., namely the Twitter-sphere,” she explains. “Is social media affecting the way we see the world, and will it continue to do so? There’s not much research on social media,” she continues, “because it’s so new. I want to see if it tells us something new about the world we’re living in.”

Interested in applying in the future? Our application form can be found here.