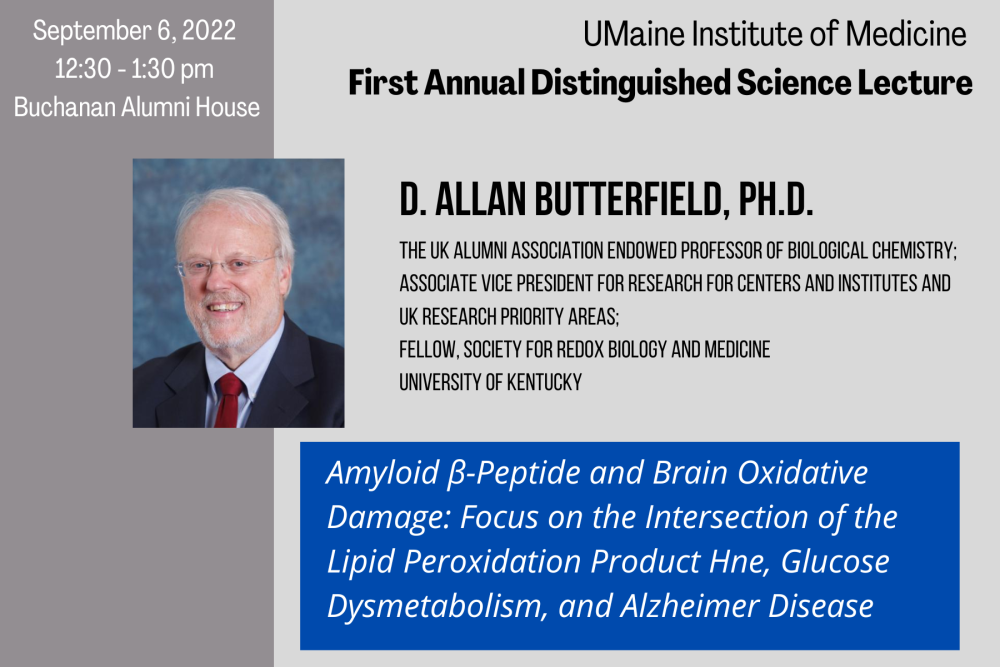 About the seminar: Alzheimer disease (AD) is the major, age-related dementing disorder that currently affects nearly 6 million Americans and, in the absence of disease-modifying treatments, is predicted to affect between 15-20 million Americans by 2050. Pathologically, AD is characterized by accumulation of senile plaques (composed mostly of aggregated amyloid β-peptide [Aβ] and dystrophic neurites), neurofibrillary tangles (composed of paired helical filaments of hyperphosphorylated tau protein) and loss of synapses and neurons. Our laboratory discovered that small oligomers (dimers, tetrameters, etc.) of Aβ are associated with oxidative damage to neuronal bilayer lipids and membrane and cytosolic proteins. The lipid peroxidation product 4-hydroxynonenal (HNE) covalently binds to proteins to change their structure and cause loss of function. We showed both in vitro and in vivo that the single methionine residue of Aβ was essential to produce HNE and the mechanism involved. Our laboratory pioneered the methods of redox proteomics and used these mass spectrometry-based methods to identify key AD brain proteins that were oxidatively modified by HNE, which led to their dysfunction. Among these proteins are those associated with glucose metabolism, which is known to be a key characteristic of AD brain. Loss of ATP due to glucose dysmetabolism can lead to neuronal death by several mechanisms, mostly involving loss of cell potential and resultant Ca2+ overload. Protein quality control, i.e., UPS system, UPR, and autophagy, also are dysfunctional in AD. Moreover, insulin resistance is characteristic of AD brain. One mechanism by which insulin resistance results in AD is due to activation of the normally quiescent mammalian target of rapamycin complex-1 (mTORC1), which also leads to inhibited autophagy. Aβ is able to cause activation of mTORC1, and our laboratory was the first to demonstrate that biochemical signatures of insulin resistance and inhibition of autophagy were present in the prodromal stage of AD known as mild cognitive impairment (MCI). This seminar will review these findings and show that Aβ-associated oxidative stress and HNE production are key factors in the pathogenesis and progression of AD. Support: Grants from the National Institute on Aging (NIH).

About the speaker:  Prof. Butterfield was born in a small town in Piscataquis County, Maine. He graduated with a B.A. in Chemistry with High Distinction from the University of Maine in 1968 and following a 3-year commitment as a missionary in Rhodesia (now Zimbabwe) to teach African high school students in an Apartheid country, he entered Duke University to earn his Ph.D. in Physical Chemistry in 2.5 years. For nearly two years thereafter, Prof. Butterfield undertook a NIH Postdoctoral Fellowship in Neurosciences at the Duke University School of Medicine. Butterfield was appointed Assistant Professor of Chemistry at the University in 1975 and was promoted to Associate Professor with Tenure in 1978 and Full Professor of Chemistry in 1983. For the last 20 years to the present, Prof. Butterfield is the UK Alumni Association Endowed Professor of Biological Chemistry. For the past seven years, Prof. Butterfield has served as Associate Vice President for Research at UK with responsibilities for Centers and Institutes and the seven Research Priority Areas of the University of Kentucky.
At UK, Butterfield graduated 68 Ph.D. and M.S. students, and over 180 undergraduates performed independent research in his laboratory (more than 60 co-authored papers on Prof. Butterfield’s papers based on their research). He published nearly 700 scientific papers, mostly on his research on Alzheimer disease, with a h-index of 123, and his total assembly of papers have been cited nearly 60,000 times. His Field-Weighted Citation Index is 2.4-2.6, meaning his citation rate is 240-260 percent greater than the average citation rate for his field of research.
Prof. Butterfield is credited with discovering that small oligomers of amyloid beta-peptide (Abeta), which accumulate in the Alzheimer disease brain, are associated with free radical production that leads to lipid peroxidation and protein oxidation causing death to neurons. Prof. Butterfield’s research, shown by his extensive publication record, changed the paradigm for understanding the pathogenesis and progression of Alzheimer disease to include oxidative damage as a key factor.
Prof. Butterfield was recently recognized by others: a) In 2021 as the number-1 ranked most productive researcher worldwide in published papers in the field of oxidative stress in neurodegenerative disorders; b) In 2021 named as a Top-5 researcher worldwide in papers on mechanisms of brain metabolism in Alzheimer disease in the 20-year period 2000-2020; and c) In 2020, named as being in the top 0.007% of more than 144,000 scholars worldwide in the entire field of Alzheimer disease research (#10 in the world; #6 in the USA).
Among others, additional honors and awards bestowed upon Prof. Butterfield were: a) He was selected as a Fellow of the Society for Redox Biology and Medicine in 2012 [one of only 28 Fellows of the Society at the time of his election]; b) The Discovery Award from this same Society in 2013 for his seminal research on Alzheimer disease; c) In 1998, Prof. Butterfield was presented the Presidential Award for Excellence in Science, Mathematics, and Engineering Mentoring by President Clinton in the White House for his having mentored many females, persons of color, and persons from economically disadvantaged Appalachia among his graduate and undergraduate students, postdoctoral scholars and visiting scientists—such persons are highly underrepresented in faculty ranks in the discipline of Chemistry; and d) What Prof. Butterfield considers the award of which he is most proud to have received: At the 2002 Spring Commencement at the University of Maine, he was awarded an Honorary Doctor of Science degree by his alma mater based on his record of achievement by a graduate from the University of Maine.