Lobsters are benthic, which means they live on the bottom of the salty, cold ocean.Photo by Bangor Daily News

Questions from Kids About Lobsters & Lobstering

Where do lobsters live?
Lobsters live at the bottom of the ocean.  The like the cold and salty waters.  They also like to hide in rocks and weeds.

What do lobsters eat? Do they have teeth?
Lobsters like to eat crabs, clams, mussels, starfish, other small fish and shellfish… and sometimes even other lobsters. A lobster does have teeth — but they are not in its mouth, they are in its stomach. The food is chewed in the stomach between by what look like three molars. These are called the “gastric mill”.

How big can a lobster get? How does it grow?
The biggest lobsters ever seen were about 3 1/2 to 4 feet long from the tip of their claws to the end of their tails. The world record weight for a lobster is 44 pounds and 6 ounces! Lobsters grow by molting — that means when they want to grow bigger they will lose their outside shell and grow a new, bigger shell. Then their body will grow to fill the new shell. This happens many times when they are very little, and then as they get older it will only happen once a year or once every two years. When they first molt to grow, the new shell is very soft but will soon get harder again.

Why is a lobster’s shell so hard?
Lobsters do not have bones or a skeleton on the inside like people do. Instead, they have a hard outer shell or exoskeleton to protect and shape them. Lobsters are also called crustaceans because they have this hard outer shell.

What do you call a lobster with one claw? Will that lost claw grow back?
A lobster that has lost one claw or has any missing appendage is called a cull. One that has lost two claws is called a bullet or dummie. Lobsters can grow back new claws, legs, and antennae.

What does conservation mean?
Conservation means to take care of something carefully so that it will always be there. Lobstermen and scientists try to take care of the lobster stock so there will always be lobsters in the ocean and enough for lobstermen to catch too. They do this in many ways, like putting smaller lobsters and mother lobsters back in the ocean if they catch them.

Who can fish for lobsters?
A lobsterman can be a man or a woman…or a boy or a girl. You have to get a special fishing license just for lobsters. Some people catch lobsters for fun, but many men and women catch and sell lobsters as their job. You need to learn how from another person that catches lobsters and you have to have that special license.

How do you catch a lobster?
Lobsters are caught in lobster traps (also called lobster pots). A lobsterman will put a bag full of bait (usually herring or other fish) in each trap. He or she will then go out in the ocean in their lobsterboat and drop their traps into the water, and hope that the lobster will go into the trap because they want to eat the bait. Once a lobster is in the trap it is hard for it to get out. After a day or two, the lobsterman will pull up the traps they dropped into the water and hope to see lobsters inside.

Can you keep all the lobsters you catch?
No. Sometimes lobsters have to be put back in the ocean. Most of the time, lobstermen will put mother lobsters back into the ocean; and also the smaller, younger lobsters. Sometimes they put the very big lobster back too. They do this to be sure there will always be enough lobsters in the ocean and enough for fishermen to catch and people to eat. This is called conservation. 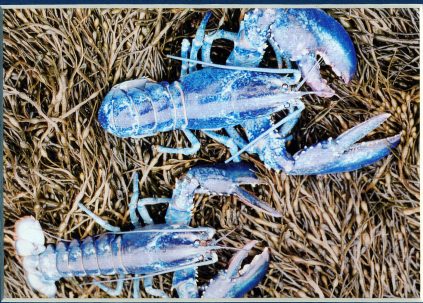 Lobsters come in many colors. All of them turn red when cooked, except the albino or white lobsters.Lobster Institute photo. 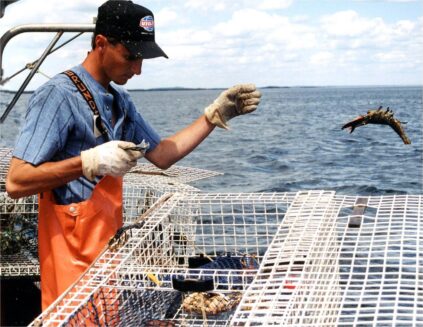 A lobsterman catches lobsters in a trap. If the lobster is too small, he puts it back in the water as a conservation toolLobster Institute photo.
Lobster Institute
193 Clark's Cove Road Walpole, ME 04573
Tel: 207.581.1443 Fax: lobsterinstitute@maine.edu
⨉
Top