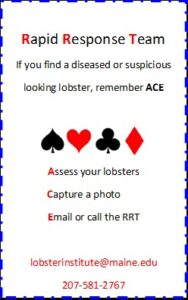 Thanks to the support from Maine’s lobster license plate holders, the Lobster Institute and the Maine Aquatic Animal Health Laboratory have formed a Rapid Response Team (RRT) to look at issues related to lobster health.   The RRT’s goal is to develop the ability and sensibility within Maine’s lobster industry that early reporting and diagnosis of presumed diseased or deformed lobsters is critical to gauging the population’s susceptibility to new and emerging pathogens.

The intent is to make it fast and easy for lobstermen to tap into this Team for a convenient way to have possibly-diseased or malformed lobsters quickly assessed.  Lobstermen are encouraged to report such lobster to the RRT for early observation and diagnosis.  Lobstermen should remember A.C.E:

The RRT will then determine if a lobster should be further examined at the laboratory, and make the arrangements for pick-up or shipping.  Laminated copies of the A.C.E. Card were distributed at the Maine Fishermen’s Forum so lobstermen can keep them close at hand on their boats or in their wallets.  Cards are also available by contacting the RRT.

According to the team’s leader Dr. Deborah Bouchard, Manager of the Maine Aquatic Animal Health Laboratory, “In order to look at the lobster’s susceptibility to disease, we need to rapidly respond to incidence of disease – particularly possible new and emerging pathogens. Protection of the lobster population is critical to both the ecosystem and to the thousands of people that rely on sustaining a healthy resource for their livelihood.  We must be able to respond rapidly to lobster health and environmental crises facing the lobster industry – or simply diagnose and analyze diseased and suspicious lobsters, without being bound by the long lag-time encountered when trying to secure grant or state contract funding.”

Team member and Associate Director of the Lobster Institute, Cathy Billings notes that, “The Team will be able to respond with solid, scientific research where the need is the greatest, and when the need is the greatest.”  She added that the RRT wants to hear about, and hopefully see via photos, all suspect lobster whether they are legal or not legal for landing.

The RRT has been in communication with the Marine Patrol and they are aware that certain suspicious lobsters may be held on lobster boats pending RRT analysis, even if they are shorts, over-sized or eggers.

Primary funding for the RRT came through an award from the Lobster Research, Education and Development Fund, supported by lobster license plate fees.  This allowed the RRT to contract with Maine’s Department of Marine Resources to provide the needed laboratory analysis.

For more information, contact Cathy Billings at the Lobster Institute at 207-581-2751, or email lobsterinstitute@maine.edu.