Professor Collins did a postdoctoral year in the Department of BioEngineering, Univeristy of Utah where he pioneered the emerging field of micro chemical sensors. In 1981 he joined the research staff at Abbott Corporate Laboratories in their diagnostics division developing micro sensor based clinical assays. From 1984-86 Prof. Collins visited the Swiss Centre for Microelectroniques in Neuchtel Suisse to transfer microsensor technology to the Swiss national microfabrication effort. In 1986 Prof. Collins returned to the US to start an international consulting company in chemical sensors and microfabrication, and he served as CEO until 2002. In 1992 he accepted an Adjunct Associate Professor position at the University of California, Davis, Department of Electrical and Computer Engineering where he established the MicroInstruments and Systems Laboratory and served as co-Director until 2003. In 2002 Prof. Collins transferred to the University of Maine

Professor Collins’ research interests include the design, fabrication, and development of MicroInstruments, MicroSystems, and NanoDevices across all disciplines; electrochemical characterization of electronic materials; and fractal phase transitions. Below are listed some specific research interests. 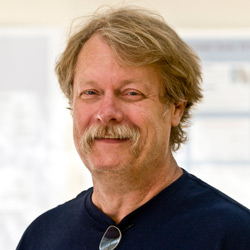