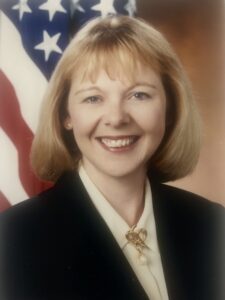 The Mary Berry Gerwin Scholarship Fund supports students involved with programs of the UMaine William S. Cohen Institute for Leadership and Public Service. Mary served for two decades as a senior and key member of Bill Cohen’s Senate and Pentagon staffs before her death in 2001 at age 46 from breast cancer. She was a Portland native and a graduate of what was then known as the University of Maine at Portland-Gorham.

The scholarship fund was established in her honor in 2021 with a gift from her husband, Edward Gerwin. The scholarship honors Mary’s memory, and Bill Cohen’s role as her mentor and friend.