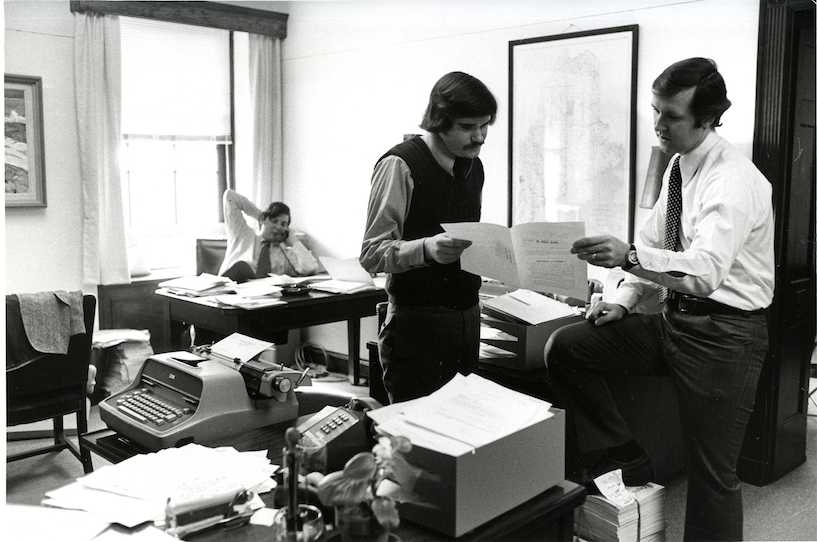 When I retired from the Senate, I decided that my papers, more than 1500 boxes worth, would come to the University of Maine because I believe that the product of a public career should go to a public institution.”

Secretary Cohen donated the William S. Cohen Papers to the University of Maine in 1996. The Papers span six presidencies, three terms in both the U.S. House and U.S. Senate, and four years at the Department of Defense; bringing together a distinguished 24 year career serving the people of Maine and the United States.

The early segment of the Papers were created by Cohen and his staff during his time in Congress, and consist of the record and his correspondence from his three terms in the House of Representatives (1973 – 1979) and his three terms in the United States Senate (1979 – 1997). They also include memos, reports, press releases, appointment calendars, speeches, voting records, photographs, and video footage.

The more than 1500 boxes of documents present an inside look at the legislative and committee-related work Cohen conducted on a variety of issues. The collection also provides insight into the attention and services Cohen offered to his constituents back in his home state of Maine, his public and press activities, and the administrative bustle of his office in Washington D.C. The Papers do not, however, focus solely on Cohen’s time in Washington; they also deliver a narrative of his career in public service, beginning with his decision to run for Congress in 1972 up-through the announcement of his retirement from the Senate in 1996.

In 2001, after serving as Secretary of Defense for four years, under democratic President Bill Clinton, Cohen added the reference files from his office at the Department of Defense (DOD) to the collection. These unclassified files contain a host of documents, including general files, trip reports, photographs, and news clippings. Unlike the congressional materials, the DOD files are in electronic format and consist of 16 CD-ROM disks.

The Cohen Papers are the responsibility of the University’s Special Collection Archivist and have been organized into six major record groups:

The collection is available to anyone and everyone. Whether you are part of the University of Maine community or a member of the general public, we encourage you to access and use the Papers. The Cohen Papers are a rich resource for researchers from a variety of disciplines, including political science, international affairs, public policy, and history. The papers extensively document key periods of U.S. history, including two of the most infamous constitutional crises in American history, “Watergate” and “Iran-Contra,” both of which Cohen played an integral role in investigating and resolving.