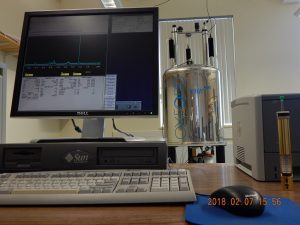 The University of Maine Chemistry Department’s goal is to ensure the NMR Facility provides researchers with optimum NMR tools and resources. Our NMRs serve not only the Chemistry Department but also researchers from other research facilities. We encourage researchers from colleges and businesses across Maine to assess whether NMR can help them to achieve their goals. As part of this initiative, this web page provides an introduction to NMR. It also provides information and news for potential NMR users on the status of the Department’s NMRs and on how they are being utilized in various research projects.

Contents:
What can NMR do for you?
How does it work?
Is NMR difficult to use?
How to start utilizing NMR
University of Maine NMR Facility Administration
More Information about Learning NMR
Examples of how NMR is used at the University of Maine

What can NMR do for you? 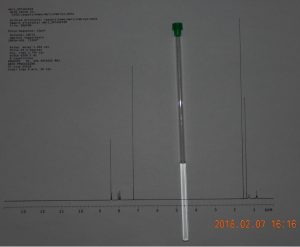 NMR is used to easily identify unknown chemical compounds without the need of a chemistry lab. For simple compounds the process usually takes about ten minutes. NMR is used to identify the chemicals  found in our environment like the pesticides found in our gardens, hydrocarbons found in our fuels and in the air we breathe, acids found in the foods we eat, and even in the proteins and DNA that life is based on. The list is endless. As one of the most powerful tools in chemistry for identifying chemicals, NMR has vast potential in areas like biology, food science, chemical engineering and marine science.

How does it work? 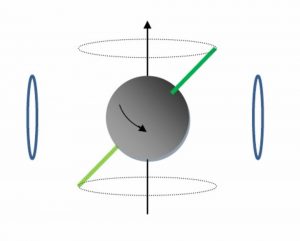 It is an amazing fact that most atomic nuclei have a quantum spin, a fixed mass, and behave like tiny magnets. When placed in a strong magnetic field they can precess  such that they draw out the dotted circles as shown here.  The spinning wheel in this video demonstrates this motion. The precessing frequency can be measured accurately by the wire coils shown here in blue. A driving alternating current placed on the same coils can be used to make the nuclei precess. Most elements in the periodic table have a unique precession frequency when placed in a fixed magnetic field. By measuring the unique frequencies found in a sample, we can determine the type of chemical elements contained in that sample. In our magnets, hydrogen nuclei precess at 400 million cycles per second, carbon at 100 MHz and nitrogen at 29 MHz. The frequency of this precession can be determined from the oscillating current in the wire coils as shown here in this simulation. 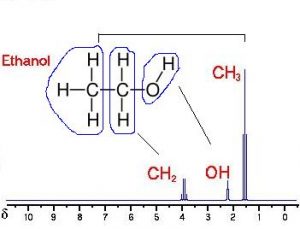 But NMR is even more powerful than that. The frequency also depends on other nuclei that are chemically bonded to the nuclei we are observing. The bonds actually shift the precession frequencies  slightly. With this frequency shift information, a trained chemist, or someone using smart software, can identify not just the atomic elements in a chemical sample, but also the  compounds made up of those elements in a sample.  For example, the hydrogen NMR spectrum shown here of intensity versus ppm of frequency shift, reveals that a compound in a sample has CH3, CH2 and OH peaks. A trained chemist or someone using chemical analysis software could easily identify this compound as ethanol.

Is NMR difficult to use?

NMR technology has evolved over time and has become easier to use. In many cases, a user can insert their sample, press a button on a computer screen and within a few minutes collect all the data they’ll need to identify their sample. They can then transfer that data into an NMR analysis program installed on their computer that includes a chemical library of spectra, and use it to identify the chemical compounds in their sample. Here is a typical sequence for NMR users at the University of Maine. 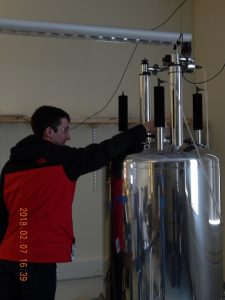 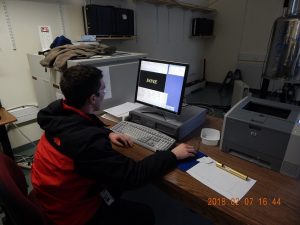 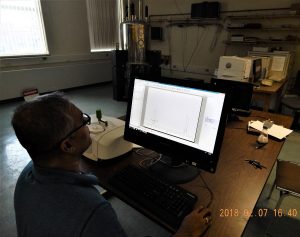 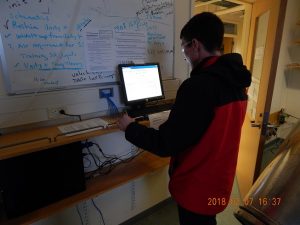 NMR has evolved as a powerful tool for identifying increasingly complex molecules, like proteins and DNA. Identifying compounds like these may require much longer data collection times and more NMR expertise.

How to Start Utilizing NMR

Researchers begin by sending their graduate and undergraduate students to the NMR Facility Manager, David Labrecque, 207-581-1195, for NMR training. Students are often paired with other trained users as part of their training. New users are trained to do basic NMR in about 3 to 5 hours. This includes a one hour lecture, an hour of exercises and a worksheet that must be completed satisfactorily. New users start out with a “learner’s permit” where they are allowed to use the NMRs weekdays, between 8 and 4, when other trained users are around to answer questions and provide general assistance.

We’ve developed NMR training software to help new users learn about NMR and how to use it safely. Designed as an informative and interactive game, most beginners actually enjoy learning about using NMR without the stress of worrying about damaging a real instrument. After they complete this session, trainees get to do some NMR analysis with a decommissioned NMR that works the same as the bigger working NMRs. After completing a worksheet successfully, novice users get a learner’s permit to use the University’s 400 MHz NMRs, where they can collect and analyze real data from real samples. After a quick final check, they can use the NMR anytime.

An increasing number of users have been taking advantage of the University’s NMR facility. This graph of NMR user sessions documents a 47% increase in use since June 2014.

We encourage faculty at the University of Maine and at other colleges, and researchers at hospitals, Jackson lab, and those in the business community with a need for NMR analysis to assess how NMR can aid their endeavors, and if warranted, to attend our yearly NMR workshop, which includes lectures and hands-on instrument time.

The committee oversees an NMR Facility Manager and an NMR Advanced Applications Consultant. The facility manager maintains the NMR facility and provides NMR workshops and one-on-one instruction on an as-needed basis. The advanced applications consultant provides advanced training, collaborates with researchers and offers NMR research services to the on- and off-campus research community. The University of Maine Chemistry Department also offers various courses that include NMR components, and offers a yearly NMR seminar open to researchers and those in the business community with a potential need for NMR. 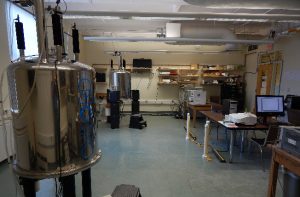 The Chemistry Department has two 400 MHz Agilent/Varian NMRs, a Unity and an Inova NMR. Both are working well. Each is connected to a Sun station running Vnmr 6.1 C. The Inova can also be run from a Dell PC running CENTOS and VnmrJ 4.3 software. We have several probes including two gradient 4-nuke broadband types, a gradient indirect detection and a solid-state MAS probe. The Department also has a 45 MHz picospin desktop NMR with capillary injection and a de-energized Varian 300 MHz NMR, both used for teaching.

NMR stands for Nuclear Magnetic Resonance.  The word “nuclear” refers to the nucleus of common stable atoms and has nothing to do with radioactive compounds or with radioactivity in general.

Those who are new to NMR might want to check out: https://en.wikipedia.org/wiki/Nuclear_magnetic_resonance_spectroscopy

For those who want more depth, check out this site beginning with Chapter 3: https://www.cis.rit.edu/htbooks/nmr/inside.htm

Examples of how NMR is used at the University of Maine