Your University of Maine Bill Simplified for 2021

On behalf of the University of Maine, I am pleased to share with you exciting news of proposed changes to streamline and simplify the process to pay for tuition and fees beginning with the 2021 Fall Semester.

If the pilot plan meets with approval by the Board of Trustees later in May, the University of Maine’s average per credit hour rate for mandatory fees would be consolidated into the per credit hour tuition rate with the noted exception of the Student Activity and Technology fees referenced below.

For some time, students and parents alike have expressed a degree of frustration in accounting for both tuition and multiple fees in payment of semester bills at University of Maine System (UMS) campuses. In response to that feedback, the UMS Student Pricing Task Force recently concluded a study aimed at exploring the restructure of the billing process. The survey discovered more than 500+ separate fees across the System, not an uncommon outcome within public higher education across the country.

A Pilot Program to Collapse Fees into a Single Tuition Charge 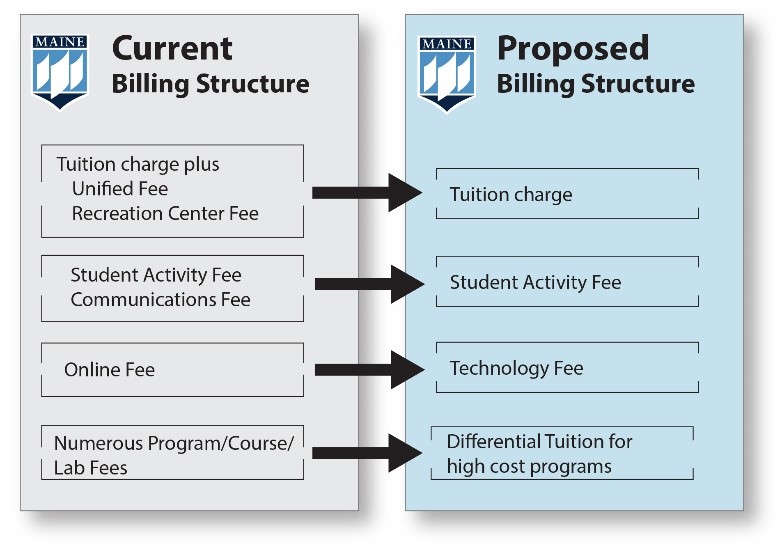 The result of the process is the proposal of a pilot program on the University of Maine campus designed to collapse most fees* into a single tuition charge to simplify the calculation and remittance of expenses representing a cost neutral solution for students and their families. A single tuition charge, a concept gaining in popularity at colleges and universities across the nation, makes it much easier to calculate and track costs for students and their families when reviewing billing statements from the Office of the Bursar and contributes to greater understanding of how to fund a UMaine education.

Some additional higher cost programs such as Engineering, Nursing, and Business would see the conversion of current fees charged for particular courses into a new differential tuition. The same benefits of simplification and ease of payment would be realized over the entire span of a student’s completing those degrees with a similarly cost neutral outcome.

The second change that students and their families can expect is a move to paperless billing for University of Maine tuition. The advantages of an exclusively electronic approach represent a significant step forward in the simplification of the payment process and we are equally excited about what this important development promises in terms of convenience for students and their families. Students can designate parents or other appropriate contacts to receive the electronic bills and paper bills will remain available upon request.

Our commitment is to keep you fully informed of our progress with the proposed single tuition charge and implementation of paperless billing. We look forward to sharing updates moving toward the open of the 2021 Fall semester and, as always, questions about current payment and balances may be directed to the Office of the Bursar at 207-581-1521 or umbursar@maine.edu.

*The only two mandatory fees that would remain itemized on a student bill would be the Student Activity Fee because of its annual designation from the Student Government Association and Technology Fee which would be carved out for support of technology and the learning environment.