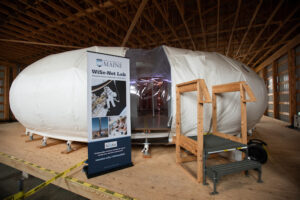 The University of Maine has a long history of space-related research and development activities dating back to the early 90s. Supported by NASA and Maine Space Grant Consortium our fellowship and scholarship programs have been continuously running for over 30 years, training the future workforce, generating intellectual property, and contributing to the state economy. In the past decade, UMaine has been the host research institution for NASA’s inflatable lunar habitat and test site for the next generation of hypervelocity decelerators to support NASA’s goal to take humans to the Moon and Mars. UMaine’s research led to the development of a Wireless Leak detection System for the International Space Station (ISS), which was launched to space in 2016.

UMaine’s space research outreach goes beyond the university community and into the K-12 system. The first small satellite in the state of Maine is now under development at UMaine to support several science missions defined by middle and high schools in Maine. Our internship programs at the NASA field center resulted in several of our students being recruited by NASA, SpaceX, and other space technology companies. Maine Space Research Initiative will provide centralized support to take these successful research programs to the next level, through cohesive strategic planning and infrastructure enhancement.