Noreen Silver has been described by Michael Tumelty in the Glasgow Herald as “an extraordinarily soulful player” who “demonstrates an uncommon depth of feeling and imagination.” Since 1999 she has been an adjunct faculty member at the University of Maine, where she directs the Chamber Music program, teaches cello and Music Theory. Noreen also holds the position of Principal Cellist in the Bangor Symphony Orchestra, and has appeared as soloist with the orchestra on numerous occasions. She grew up in Glasgow, Scotland, studied at the Royal College of Music in London, and at the New England Conservatory of Music in Boston, MA. She was fortunate to pursue independent study with the great cellists Jacqueline du Pré and Pierre Fournier. Along with her husband, pianist Phillip Silver, Noreen has performed much of the cello/piano repertoire in
the USA, Europe, Israel and the UK. Much in demand as a teacher, Noreen has also served on the faculties of the Royal Conservatoire of Scotland and Strathclyde University. 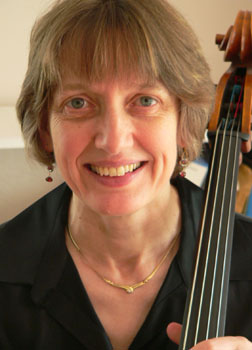 Instructor of Cello and Chamber Music