Julie Arnold Lisnet is an actor, director and educator. She teaches Fundamentals of Acting and Survey of Dramatic Literature at UMaine. She received her BA in Theater and her MA in Acting from UMaine and has worked for Penobscot Theatre, Maine Theatre, Theatre of the Enchanted Forest, The Assembled Players, Marsh Island Stage, Maine Shakespeare Festival, Northern Lights Theatre and True North Theatre. She is a founding member/actor/director for Ten Bucks Theatre Co. and has directed TBT’s productions of The Bald Soprano, Terra Nova, The Effects of Gamma Rays on Man-in-the-Moon Marigolds, Macbeth, Twelfth Night, Romeo and Juliet, Hamlet, One Flew Over the Cuckoo’s Nest, A Midsummer Night’s Dream (co-directed), The Tempest, Death of a Salesman, The Comedy of Errors, The Merry Wives of Windsor, The Elephant Man, Spoon River Anthology, (co-directed) and most recently As You Like It. For UMaine she has directed The Legend of Sleepy Hollow, The Curious Savage, Rumors, The Mineola Twins and Twelfth Night. Directing credits also include The Odd Couple and Arsenic and Old Lace for The Grand in Ellsworth. Favorite roles include Lady Macbeth in Macbeth, Sister Mary in Sister Mary Ignatius Explains It All for You, Martha in Who’s Afraid of Virginia Woolf?, Nat in Rabbit Hole, Lady Bracknell in The Importance of Being Earnest, Sybil in Fawlty Towers, Louise in Always…Patsy Cline, Mark Antony in Julius Caesar, Van Helsing in Dracula, Mrs. Webb in Our Town, Mattie Fae in August Osage County, Annie in Calendar Girls and Eleanor of Aquitaine in The Lion in Winter. She was most recently seen in Penobscot Theatre’s productions of Safety Net and Flyin’ Solo. Julie lives in Bangor with her husband Ron and their daughter, Natalie Acadia. 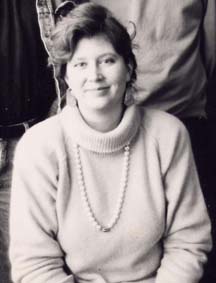