Professor of Trumpet Dr. Jack Burt joined the School of Performing Arts in the fall of 2004. In addition to his responsibilities within the trumpet studio, Dr. Burt directs the Brass Ensemble, the Trumpet Ensemble and coaches student chamber brass groups. He also teaches courses in Music History.

He earned degrees from the Baldwin-Wallace College Conservatory of Music, the University of South Carolina, and the University of Texas at Austin, with additional private studies in Berlin, Germany. His teachers include James Darling, Mary Squire, Keith Amstutz and Raymond Crisara. He has also worked with members of major orchestras in the United States and Europe, among them the Chicago Symphony, Philadelphia Orchestra and the Vienna Philharmonic, and Berlin Philharmonic.

Until his appointment to the University of Maine faculty, Dr. Burt had held the position of Associate Professor of Trumpet at Texas A&M University-Kingsville from 1991 to 2004. While in Texas he also served as principal trumpet of the Corpus Christi Symphony and the Victoria Symphony Orchestras, appearing with both groups as a soloist. He presented clinics at the Texas Music Educators Association Convention (TMEA), and was a frequent clinician and recitalist in the area. Earlier he performed for three years in Mexico City as principal trumpet of the Orquesta Filarmonica de la UNAM and was also a member of the Orquesta Filarmonica de la Ciudad de Mexico.

Dr. Burt has been a frequent contributor of articles and reviews to the International Trumpet Guild (ITG) Journal and the magazine the Brass Herald, including An Introduction to Rotary Trumpets, and a series of Interviews with the Principal Trumpets of the orchestras of Boston, Cleveland, Philadelphia and Berlin. Dr. Burt is a member of the European Brass Ensemble, which tours Europe twice a year, and has produced two successful CDs on the German classical music label, Genuin.

Dr. Burt’s personal YouTube Channel offers over 350 videos on Trumpet Etudes, instruction on the James Stamp warm-up and maintenance routine, as well as instructions on the piccolo trumpet and rotary trumpet. In all, his videos have garnered over 600,000 views.

The Trumpet Studio at UMaine

Students in the Trumpet Studio take part in weekly individual lessons, and Trumpet Ensemble rehearsals, in addition to all their other ensembles.

The studio offers a set of special custom instruments which are at the studentís disposal for their lessons, performances and recitals:

An Introduction to the Rotary Trumpet by Dr. Jack Burt 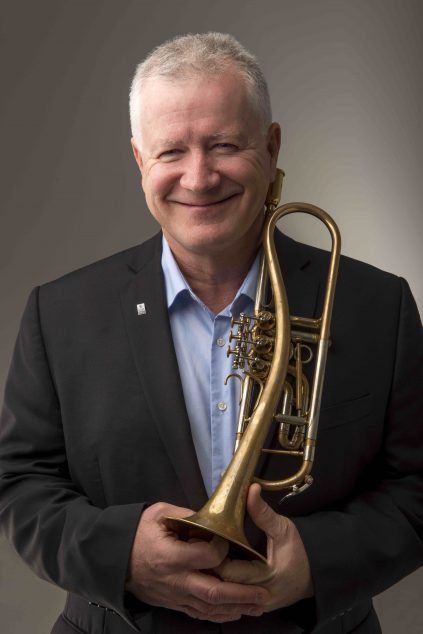