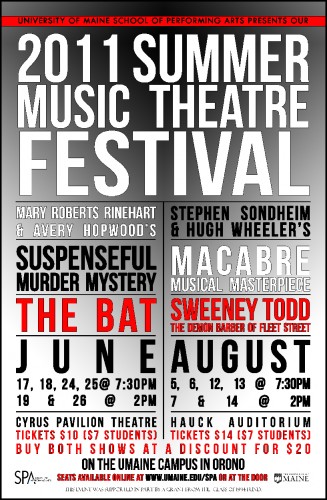 Join us for of our 2nd Annual Summer Music Theatre Festival as we’ll be presenting two exciting and gruesome tales in the Hauck Auditorium to haunt your summer evenings.

Beginning June 17 we will present Mary Roberts Rinehart and Avery Hopwood’s suspenseful murder mystery, THE BAT.  A small village searches for a stolen fortune and the identity of the illusive Bat, who murders innocent women in the dead of night.  No one knows who’s responsible for the theft or the murders, but anyone and everyone is a suspect in this heart pounding thriller.

Coming August 5 we will be presenting Stephen Sondheim’s macabre musical masterpiece SWEENEY TODD: THE DEMON BARBER OF FLEET STREET.  After returning to London from a long exile for a crime he didn’t commit a bitter barber, Sweeney Todd, finds only broken fragments of his once happy life.  Pitted on vengeance, and aided by an eccentric meat pie vendor Sweeney resumes his barber business offering his victim’s  the best, and last, shave they’ll ever have.

DISCOUNT TICKET PACKAGE:
$20 for both shows when you purchase them together.

SUMMER MUSIC THEATRE FESTIVAL:
Started in the summer of 2010 the University of Maine School of Performing Arts
premiered its SUMMER MUSIC THEATRE FESTIVAL featuring Jerry Herman’s
Hello, Dolly! and Agatha Christie’s The Mousetrap. SMTF was created to foster
outreach to the local community offering a unique opportunity for people of all ages to
work on professional theatrical productions, while giving university students a chance to
further their experience and education.

The Summer Music Theatre Festival strives to bring great theatre to the local area as our
community of participants and audiences continue to grow and develop. Already in the
works for next year is the exciting pre-Broadway musical JOHNNY BASEBALL which
will mark its Maine debut. The Summer Music Theatre Festival is quickly becoming a summer
tradition that people anticipate with great excitement. We hope you’ll join us this year,
and keep coming back.