Today’s youth grow up constantly exposed to myriad forms of technology, including television, computers, tablets, smartphones, and video games. While some question the effects of the perpetual presence of technology, others take advantage of younger generations’ almost-inherent affinity for these digital devices.

This technological affinity provides a gateway into new methods for teaching. One group which has seen a multitude of applications for technology as a learning tool is the United States military.

At the University of Maine Captain Reginald Bennett, a graduate student and active army officer, is exploring the applications of one particular technology which has seen rapid improvements in recent years: virtual reality (VR).

In 2006, Captain Bennett graduated from UMaine with a degree in Electrical Engineering Technology. He also graduated from the University’s Army Reserve Officers’ Training Corps (ROTC), entering active duty after leaving the school.

Bennett returned to UMaine in 2013 to pursue a Masters in Information Systems in the School of Computing and Information Science. The U.S. Army granted him 18 months to complete the degree with active pay, in exchange for a follow-on 4.5 year service agreement, meaning he can put all of his focus towards his degree and the work he is doing at the university.

His degree will be in Information Systems, but the real focus of Bennett’s work has been on virtual and augmented reality. He foresees numerous applications for the technology, in the military and elsewhere.

One of the biggest uses in the military will be in allowing soldiers to prepare for active combat or support operations in a realistic manner without using expensive equipment and funding or risking injury. Some current advanced training simulations accomplish this, but often they are often static and require transporting troops to a specific location. The transport of troops is expensive, time consuming and disrupts their regular training.

The existing training simulations require a large space and are still not fully immersive. One situation Bennett described is simulating driving a military vehicle through a battlefield. The training simulation equipment involves screens that allow the trainee to see desired virtual environments instead of the facility the simulator is located in.

The simulation is enhanced by the vehicle moving as if it were driving over unstable ground, as well as mimicking the sound of combat and impacts striking the outside.

According to Bennett, simulations like the one he described help prepare soldiers for combat by allowing them to experience real world scenarios that would be very difficult to simulate. However, he sees room for improvement. The soldiers inside are too aware that they are looking at monitors in a warehouse, and not actually in combat.

Although it is still a developing area, one of the ultimate goals of virtual reality is to achieve as great of a level of suspension of disbelief for the user as possible. The greater the degree of suspension of disbelief, the more the user believes he or she is experiencing the simulation for real. As the technology is improved upon, this will allow Soldiers to become fully immersed in realistic training simulations. The more life-like the training are, the easier it is for Soldiers to learn and create automatic responses to situations that can be critical in saving lives.

Another major advantage of virtual reality is that these simulations could take place almost anywhere, eliminating expensive travel fees and the disruption of regular training.

One of Bennett’s goals is to leave the university with his own mobile VR lab. He has created his own VR room in his office in Boardman Hall, using only a computer, a Microsoft Kinect, and an Oculus Rift. The Kinect tracks his body movements, relaying them to the computer and updating his location via the Oculus Rift, a virtual reality headset.

A video demonstrating Bennett’s early progress with the Kinect and the Oculus Rift.

Bennett purchased the equipment himself and believes that it is affordable enough that in the future, every organization, maybe even every soldier, in training might have their own personal VR lab. The soldiers would be able to use the equipment in and out of regular training, running simulations to prepare them for a multitude of combat and support situations. Bennett also sees this kind of VR training opportunity being usable in wide range of non-military career fields; from the Heavy Construction Equipment Operator to the Cashier at chain store.

In theory, the equipment he is using now could be moved and set up anywhere with enough space to move around. Currently his only real limitation as to where the equipment can operate is the Microsoft Kinect. The Kinect uses infrared light to create a 3D spatial map and track movement, and as such if there is an open window the outside light can disrupt the Kinect sensors and make it difficult for the device to track its user.

One other issue with using the Kinect is that while it is an inexpensive way to track body movements, it cannot detect finer motions. Specifically, it is unable to track the motion of its user’s fingers consistently. This is an issue when trying to create the suspension of disbelief take for example some very specific military training where simulations such as firing a weapon or disarming a bomb would require precise movement.

To address this issue, Bennett has been working on developing a “glove” of sorts using Arduino hardware and Lego robotics. Arduino sensors in the glove will track finger movement, relaying the information to the program running the simulation.

Similar devices have been constructed, but the ones Bennett has seen are bulky and unwieldy. In comparison, his device only requires the glove itself and a circuit board which sits on the user’s forearm. 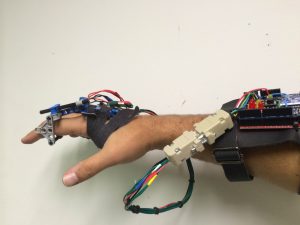 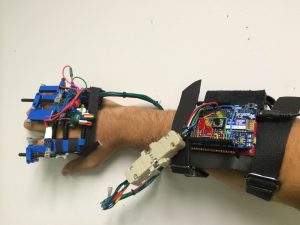 An early prototype of the glove Bennett designed using Lego pieces, an Arduino board and sensors, and other parts and pieces.

The glove Bennett designed may not appear practical for regular use. However, it is a very impressive feat creating such a device with the components he had access to. Designing this equipment is also one of the best ways to gain a deeper understanding into how virtual reality interfaces function. Bennett’s success with the glove and his other VR work proves that virtual reality equipment does not have to be bulky or expensive.

After he graduates this December, Bennett seeks to use what he has learned at the University of Maine to train Soldiers for combat using virtual reality environments. Bennett has uploaded videos of his progress working with virtual and augmented reality technologies to his YouTube page, Ben.net Plus.