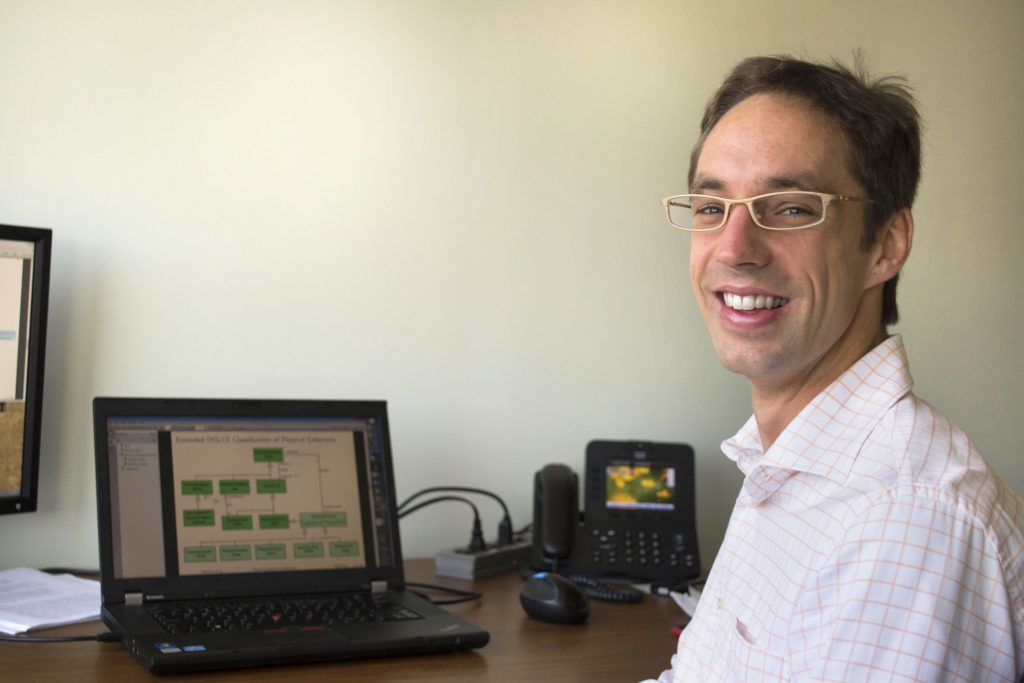 Meet Torsten Hahmann, a new assistant professor at the University of Maine working in the spatial informatics program of the School of Computing and Information Science. Professor Hahmann began working at UMaine in November of 2013.

In his position as assistant professor, he has several roles at the university: teaching courses, conducting research, and writing grants in order to obtain funding for his research. One of the primary uses for the grants will be to pay graduate and undergraduate student research assistants.

As a new professor at the university, Hahmann has found that one of the challenges he faces is getting connected with students. He is currently teaching his second course at UMaine, and first graduate course, SIE 505 – Formal Foundations for Information Science . Hahmann taught COS 205 – Discrete Structures his first semester at the university. Having only taught only the two courses, he has not yet had the opportunity to meet many of the talented minds in the department who might one day work as his assistants. Despite his short time at the university, he is already on a graduate student committee, he is co-advising another grad student along with Dr. Silvia Nittel, and is working with undergraduate students advising their capstone projects.

The research which Professor Hahmann does revolves around ontologies, in particular spatial ontologies.

In the English language, as with any other language, words often have many meanings and even more uses. While we may understand a particular conceptualization and meaning of a word based on social cues, context, etc., a computer does not. In order to communicate the specific meaning of a word (a concept), computer scientists use what is known as an ontology.

An ontology is essentially the logic behind computer software, allowing a computer program to understand the use of certain concepts within a particular domain, as well as the semantic relationship between those concepts. For example, in hydro ontology (the logical representation of water systems) one might define water as something which can exist within a river, which is defined as a type of water body. However it also must be defined that a river cannot reside within water. Further, the ontology would define what it means for water to be within the river and for the waterbody to be a river, as well as what qualities it has. For example, how it is different from water being in another waterbody or how it is different from another substance, such as a contaminant, being in the river. This may seem obvious to a human, but for a computer that is not the case. A computer only understands what we tell it, and so ontologies are very important for the functionality of many types of software.

The spatial ontologies which are of particular interest to Professor Hahmann play a role in geographic information systems, mapping applications, and CAD (or computer-aided design). His research in the area has applications in engineering, geography, earth science and biomedicine. Specifically, he would like to delve further into geographic ontologies, but he is still awaiting funding for research assistants.

Professor Hahmann has authored and coauthored several papers and presentations on ontological research, including his PhD thesis which focuses on mereotopology, a first-order theory of ontology. He is currently involved in four research projects: Ontological foundation for physical and natural sciences, Macleod: A Common Logic (LC) environment for ontology development, COmmon LOgic REpository (COLORE), and Humanova: Human anatomy ontology with variations, part of the Parametric Human Project.

Macleod is a tool which Professor Hahmann uses for a lot of his research. It is a program which focuses on automating many of the tasks involved in developing ontologies, making it easier to deal with larger, more complex ontologies. Due to the nature of the program, Macleod allows students who are less-experienced in ontological research to approach the subject with an easier learning curve.

Which is why Professor Hahmann is currently advising two undergraduate capstone projects working with Macleod. The students are primarily working on improving the program’s user interface. In particular, one student is working on visualization of ontological relationships, while the other is working on the summarization of the software’s outputs in a visual manner. As the students work on their capstone projects they are learning not only about the program itself, but also about ontologies and their development.

Professor Hahmann presented some of his recent research at the FOIS 2014 (Int. Conference on Ontologies in Information Systems) in Rio di Janeiro, Brazil which took place from Sept. 22nd to the 25th. He presented two papers at the conference, and was also co-chair of the 8th International Workshop on Modular Ontologies (WoMO 2014) and the Early Career Symposium, which allows students to introduce their work at an early stage to the research community.