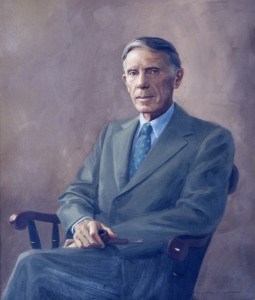 A native of Caribou, Libby began his UMaine career in 1934 as an assistant professor of agronomy, advancing to full professor and then chair of the department. He served as dean of the College of Life Sciences and Agriculture and director of the Cooperative Extension Service before being named president in 1969.

Libby was widely respected for his dedication to improving the learning environment at UMaine during a time when the structure and goals of higher education were under intense scrutiny in the nation.

Libby Hall, dedicated in 1990 and housing the offices of the UMaine Cooperative Extension Service, was named in his honor. Libby also laid the groundwork for the Franco-American Center on campus. For about 10 years after his retirement from UMaine, Libby contributed a regular weekly column to the Ellsworth American entitled “Thoughts While Shaving.”

Libby earned his bachelor’s and master’s degrees at UMaine and pursued additional studies in agronomy at Rutgers and Cornell. He died in 1993 at the age of 81.