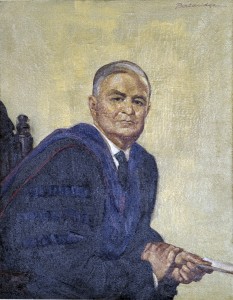 Robert Aley led the University of Maine during the World War I years. During his administration, enrollment topped 1,000 for the first time, with female students making up much of the surge. In addition, enrollment doubled in the College of Agriculture. Aubert Hall and Balentine Hall were constructed, and a course in papermaking was established. Stuart Hall on Union Street in Bangor was purchased to house the College of Law, but was destroyed in the Bangor Fire of 1911. Aley earned his undergraduate degree from Valparaiso University, a master’s from Indiana University and a Ph.D. in mathematics from the University of Pennsylvania. He died in 1935 at the age of 72.