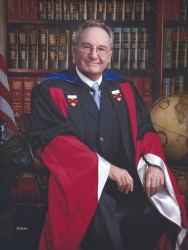 During Peter Hoff’s administration, enrollments grew strongly every year, and they included a record 30 percent of the state’s high school valedictorians and salutatorians. State and federal research funding nearly tripled. State funding for operations increased substantially, as did private support for scholarships, endowed chairs and facilities. In 2004, UMaine had record fundraising, surpassing even the top-tier private colleges in Maine. Campus construction and renovation projects totaled about $185 million. The University was ranked among the top 20 nationally by Princeton Review in the “Best Bargain Public” category. From 1997-2000, Hoff was one of the 24 university presidents who served as the Kellogg Commission on the Future of State and Land Grant Universities, which offered a vision for the new century in seven published reports. He earned his undergraduate degree at the University of Wisconsin and master’s and doctoral degrees in English and humanities at Stanford University.