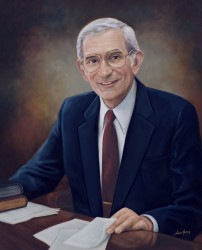 Paul Silverman came to the University of Maine after serving as director of the Research Foundation at the State University of New York. With a strong background in scientific research, Silverman significantly expanded research capabilities at UMaine. He also advanced plans to build a regional performing arts center on the campus, breaking ground for the new Maine Center for the Arts in 1983. After leaving UMaine in 1984, Silverman relocated to California where he established the first human genome center in the U.S. and was named associate chancellor for health sciences at the University of California at Irvine.

Silverman earned a B.S. in biochemistry from Roosevelt University in Chicago, a master’s in parasitology from Northwestern University and a doctor of sciences degree from the University of Liverpool. He died in 2004 at the age of 79.