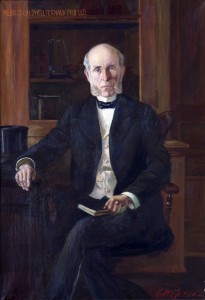 Originally named professor of mathematics and acting president in 1868 by the founders, Merritt Fernald assumed the official presidency of the Maine State College in 1879. He expanded the course offerings to include more non-technical classes and successfully lobbied lawmakers for funding to pay for buildings, furnishings and equipment. In 1887, Fernald oversaw the establishment of a federally funded experimental station for agriculture at the college farm and the construction of Coburn Hall, dedicated in 1888. The university laboratory, one of the earliest buildings on the campus, was later named Fernald Hall in his honor. A native of Levant, Fernald earned his undergraduate and graduate degrees from Bowdoin College. He died in 1916 at the age of 77.