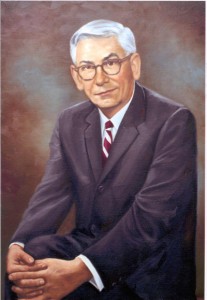 Edwin Young was a Newfoundland native who began his career as a labor economist at UMaine. He earned his undergraduate degree in education in 1940 and a master’s in economics in 1942 from UMaine, then a doctorate in economics from the University of Wisconsin-Madison in 1950. Young served with the State Department and then returned to the University of Wisconsin, where he taught economics, served as department chair and eventually was named Dean of the College of Letters and Science. In 1965, he was named president of the University of Maine, serving through some of the most controversial years of the Vietnam War and related student protests on campus.