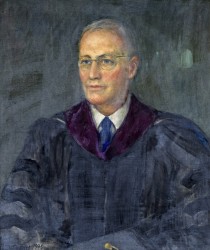 The longtime dean of the University of Maine Technology College, Harold Boardman led the University of Maine through the social and economic crisis of the Great Depression. Despite drastic cuts in funding from the state and other sources, the university was able to decrease tuition and boarding costs for students while improving efficiencies and coordination between programs and colleges. Boardman dedicated the Memorial Gym and Field House in 1933, and Stevens Hall in 1934. Boardman was the first UMaine alumnus to serve as president. He completed his bachelor’s degree in civil engineering at the Maine State College, followed by graduate study at the Massachusetts Institute of Technology. Boardman Hall, which houses engineering offices, laboratories and classrooms, is named in his honor. He died in 1969 at the age of 95.