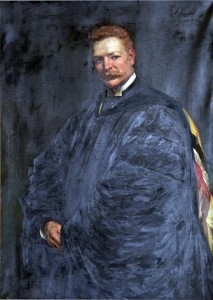 George Fellows expanded training and education at the University of Maine in the fields of agriculture, home economics and education. He established a Department of Agriculture Extension office on the campus, a precursor to UMaine Cooperative Extension. Fellows also expanded the university’s administrative structure, naming a new dean to head the rapidly growing College of Arts and Sciences as well as establishing a deanship for admissions and registration. It was through Fellows’ leadership that funding was obtained to build the original Andrew Carnegie Library on campus, which remained in use until the much larger Fogler Library was completed in 1941. Lord Hall and Hannibal Hamlin Hall also were completed during his presidency. A native of Wisconsin, Fellows completed his undergraduate education at Lawrence College and earned his Ph.D. at University of Berne in 1890. He died in 1942 at the age of 84.