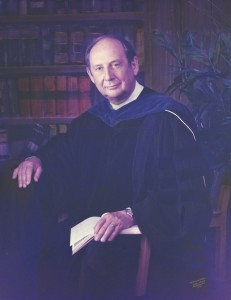 Frederick Hutchinson was a native of Atkinson, Maine, in rural Piscataquis County, and the first member of his family to attend college. He earned an undergraduate degree in agronomy from the University of Maine, followed by a Ph.D. at Pennsylvania State University. He served UMaine as a professor, dean and vice president prior to being named the institution’s 16th president. Hutchinson, credited with reversing a trend of sliding enrollments at the University, also was a leader in developing educational outreach for students in rural areas. The Hutchinson Center in Belfast, which brings UMaine classes and other programming to students in the mid-coast region of Maine, opened in 2000 and is named in his honor. Hutchinson retired in 1997 and died in 2010 at the age of 79.