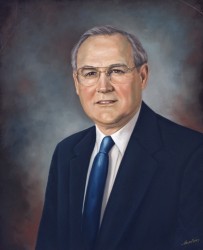 Dale Lick initiated a university-wide evaluation of existing programs, including graduate and undergraduate education and the University of Maine’s overall effectiveness at serving the needs of Maine residents. He instituted a new student fee to raise extra revenues during a cash-strapped budget period and supported the development of athletic programs to attract more out-of-state students. Prior to his appointment to UMaine, Lick served for eight years as president of Georgia Southern College. Lick earned his bachelor’s and master’s degrees at Michigan State University and a Ph.D. in mathematics from the University of California at Riverside. He left UMaine in 1991 and was named president of Florida State University.