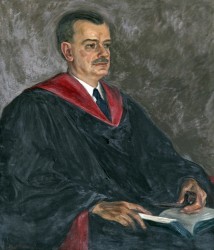 C.C. Little, a Harvard-trained scientist and researcher who went on to found the prestigious Jackson Laboratory in Bar Harbor, is credited with elevating the status of liberal studies at the University of Maine and obtaining the funding to build Stevens Hall, and the Memorial Gym and Field House. During his administration, a Phi Beta Kappa chapter was established on campus. He appointed the university’s first dean of graduate study and its first dean of women. Under his leadership, UMaine was among the first institutions in the nation to pioneer “Freshman Week” — a planned orientation for first-year students that now is standard at schools across the nation. Little went head-to-head with the Maine legislature in an attempt to raise the university’s standing in legislative funding priorities, supporting a property tax system that would automatically direct funding each year to the university instead of relying on year-by-year appropriations. Maine adopted the mill tax system after Little moved on from UMaine in 1925 to accept the presidency of the University of Michigan. In 1929, Little returned to Maine to found the Roscoe B. Jackson Memorial Laboratory in Bar Harbor, now The Jackson Laboratory. In 1954, he became the director of the Tobacco Industry Research Committee. Little, who completed undergraduate and graduate degrees at Harvard University, died in 1971 at the age of 83. Clarence Cook Little Hall, dedicated in 1965, is named in his honor.