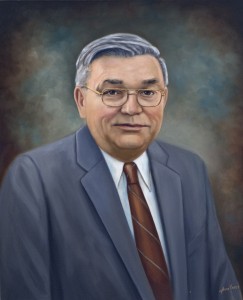 Arthur Johnson started teaching history at UMaine in 1970 and was named president 14 years later. His tenure as president saw the completion of the Maine Center for the Arts (now the Collins Center for the Arts) and a major upgrade to the Department of Marine Sciences. He helped obtain funding for a research vessel and supported the establishment of the Association of Research in the Gulf of Maine. A champion of economic growth, Johnson worked with state officials to bring technology-based jobs to the northern half of Maine.

Johnson was a 1944 graduate of Harvard University and earned a Ph.D. in history from Vanderbilt University. He retired from UMaine in 1986 and died in 2004 at the age of 83.