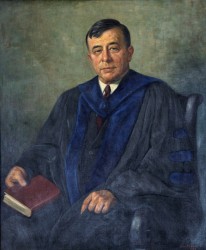 Arthur Hauck led the University of Maine in the aftermath of the Great Depression and the difficult years of World War II. Despite the pressures of these major world events, UMaine prospered under Hauck’s leadership. Fourteen major buildings were constructed during his tenure, including Fogler Library in 1941 and the Memorial Union in 1943.

Popular among students and faculty, he is credited with boosting campus morale with his friendly, informal personal style. Hauck established student government on campus, as well as the longstanding springtime tradition of Maine Day. Hauck Auditorium in the Memorial Union is named in his honor. Hauck earned his undergraduate degree from Reed College and a Ph.D. from Columbia, as well as numerous honorary degrees. He died in 1992 at the age of 99.