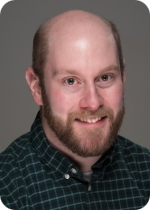 Robert W. Glover is an Associate Professor of Political Science and Honors, a joint appointment in the Department of Political Science and the Honors College at the University of Maine. His research focuses generally on democratic theory, political engagement, and policy issues such as immigration and drug decriminalization. He also serves as a co-director of the Maine Chapter of the Scholars Strategy Network, a national organization that connects academic research to policymakers, citizens, and the media.

Since 2016, Glover has been an Educational Network for Active Civic Transformation (ENACT) Faculty Fellow at the International Center for Ethics, Justice and Public Life at Brandeis University. This national program fosters civic engagement among college students by teaching them how to work with advocacy organizations, legislators and legislative staff members to impact state policy.

Professor Glover has published widely in academic journals such as Political Studies, Election Law Journal, Philosophy & Social Criticism, The Journal of Political Science Education, and Honors in Practice.  He has also contributed numerous chapters to edited volumes. Professor Glover co-edited a book (with Daniel Tagliarina at Utica College) on teaching and learning in political science, entitled Teaching Politics Beyond the Book: Film, Texts, and New Media in the Classroom (Continuum/ Bloomsbury Press). In addition, he has recently co-edited a book series, Honors Education in Transition, (Rowman and Littlefield) with Katherine O’Flaherty from Barrett Honors College at Arizona State University, examining various dimensions of the future of honors education.

Professor Glover is the recipient of numerous awards for teaching, including the UMaine College of Liberal Arts and Sciences Outstanding Faculty Award for Teaching and Advising in 2018. Professor Glover has been a finalist for the Ernest A. Lynton Award, a national award that recognizes faculty making innovative connections between teaching, research, and service to community engagement. He is a winner of the Donald Harward Faculty Award for Service-Learning Excellence, an honor given by Maine Campus Compact to exceptional educators who make “public service an integral part of their teaching.”