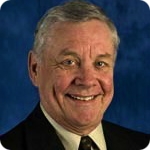 Kenneth T. Palmer is Professor Emeritus of Political Science. Professor Palmer’s teaching and research have focused on American State Politics, especially Maine politics, and U.S. federalism. Books he has authored or co-authored include Maine Politics and Government; Changing Members: The Maine Legislature in the Era of Term Limits; The Changing Politics of Federal Grants; State Politics in the United States; The Legislative Process in Maine; and Introduction to Politics. His articles have appeared in Publius: The Journal of Federalism, the Public Administration Quarterly, the National Civic Review, the Maine Bar Journal, the Maine Historical Society Quarterly, and the Maine Policy Review. He has also contributed many chapters to general works on state politics and federalism. He is co-editor of “Political Encyclopedia of U.S. States and Regions,” published by CQ Press in 2008.

During his career, Professor Palmer served on the research staffs of the Brookings Institution and of the Woodrow Wilson School of Princeton University. In 1987, he received the John Donovan Award for the best paper presented at the annual meeting of the New England Political Science Association. He was twice elected to the executive committee of Section on Federalism and Intergovernmental Relations of the American Political Science Association. From 1987 to 1997, he served as book review editor for Publius: The Journal of Federalism. On retiring from regular teaching, he was cited by the Maine legislature and governor for his contributions to the state. In 2013, Professor Palmer was the co-planner of the Politics: Then and Now in Maine and the Nation” series at the Muskie School, University of Southern Maine.